THREE FROM LOUISA AMONG NEW KSP TROOPERS SWORN IN BY BESHEAR

Cadets complete more than 1,000 hours of training to strengthen the safety of Kentuckians

FRANKFORT, Ky. (Nov. 18, 2022) — Today, Gov. Andy Beshear and the Kentucky State Police (KSP) announced that 38 cadets have graduated the agency’s training academy and are now ready to report for duty across the commonwealth with a focus on creating a better and safer Kentucky.

“The Kentucky State Police has a long history of serving and protecting this great commonwealth, and I know that the troopers graduating today will continue to uphold this standard of excellence,” said Gov. Beshear. “Thank you for choosing to protect and serve Kentucky while asking for nothing in return – and we owe you our utmost gratitude.”

Cadets reported to the KSP training academy on June 5, 2022 to embark upon 24-weeks of intense training to learn the job skills necessary to perform the duties of a state trooper. Graduating cadets pledged to uphold the mission of KSP by promoting public safety through service, integrity and professionalism using partnerships to prevent, reduce and deter crime and the fear of crime, enhance highway safety through education and enforcement, safeguard property and protect individual rights.

KSP Commissioner Phillip Burnett, Jr. encouraged Cadet Class 102 to engage in their local communities to earn the trust and respect of the citizens they will serve.

“I challenge each of you to interact frequently with those in your designated post areas. Attend community events, stop by local stores, visit the schools, and so much more to earn the trust and respect of those you serve,” said Commissioner Burnett. “Today, you have earned the title of trooper, but now you must live up to it.”

“Over the past 24 weeks, cadets have taken time to recognize all of KSP’s fallen troopers and officers through specially designed workouts that included repetition schemes significant to the service of each of the fallen units,” said Captain Darby. “Additionally, cadets recognized these heroes on their end of watch dates by gathering in front of the memorial and humbly reading their end of watch stories.”

Several members of the graduating class received special recognition during the ceremony.

Trooper Myron Jackson received the ‘Ernie Bivens Award’. This honor is presented to a cadet in each class who, in the opinion of the KSP Academy and fellow cadets, shows distinction as a leader, strives for academic excellence and has excelled in all phases of the academy’s physical and vocational training. Additionally, he received the class Valedictorian award, which includes a new 2022 police cruiser. The Salutatorian was awarded to Trooper Jordan Sammons.

Trooper Colby Amburgey received the ‘Commissioner’s Commitment to Excellence Award’. This is presented to the cadet who has demonstrated leadership, the desire to get the job done and is always determined to be the best every day. 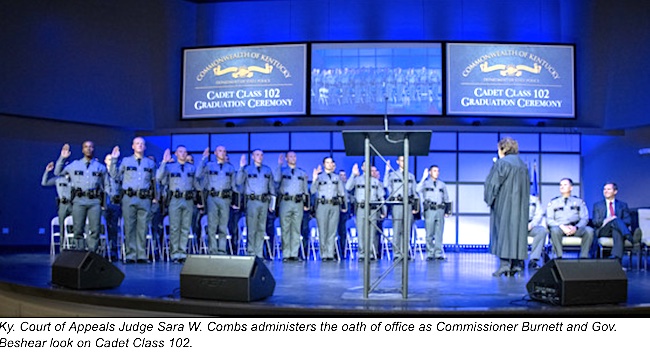 Cadet Class 102 graduates and their assigned posts are:

Thirteen cadets earned their associate degree in General Occupational and Technical Studies from the Bluegrass Community and Technical College during their 24-weeks at the training academy. These cadets benefited from the new hiring guidelines established by the state legislature in 2017. Through this revision, anyone who possesses a high school diploma or GED, and has three years of full-time work experience can apply for employment as a KSP Trooper and earn an associate’s degree during the training process.

Cadet Class 102 graduates who earned an associate’s degree are:

KSP’s recruitment branch is currently accepting applications for the upcoming cadet class 103, which is slated to begin February 26, 2023. The deadline to apply is by close of business November 25.

For more information about career opportunities with KSP visit the website.

The Beshear-Coleman administration’s top priority is the safety of all Kentuckians. The public safety actions already taken by the Governor are creating safer communities and a better Kentucky now and into the future.

Since taking office, Gov. Beshear has awarded almost $8 million in grant funding to assist state and local law enforcement agencies to purchase the tools and resources that will not only allow them to protect our communities but will also ensure their own safety as they stand on the front lines every day. Recently, the administration announced nearly $2 million in grant funding to enhance public safety, curb the sale of illegal drugs and fight addiction.

In Oct., the administration took another step forward in creating safer communities by awarding more than $350,000 in grant funding to prevent youth crime across the commonwealth.

In April, the Governor signed into law two pieces of legislation recently passed by the General Assembly to make historic investments in law enforcement by providing funds to KSP to recruit, train and retain the essential workforce needed to continue to provide the highest level of security to all Kentuckians. House Bill 259 ensures that all troopers will receive a $15,000 raise. Additionally, KSP’s starting pay for sworn officers will increase from $37,887 to $55,888 annually. By signing Senate Bill 209, Gov. Beshear established paid vacation, sick leave and holiday pay, as well as enhanced health insurance contribution payments for retired KSP troopers and CVE officers.

Also, as the Governor recommended in January 2022, $12.2 million was included in the state budget for KSP to purchase body cameras, which is the first time in the commonwealth’s history that funding has been allocated for this much-needed expense.

Gov. Beshear has championed legislative action like Senate Bill 64 and House Bill 254, making it easier for law enforcement to conduct undercover stings and increase the chances of stopping a horrific crime against a child from being facilitated through the internet. These actions will also provide law enforcement officers with the authority to charge offenders with harsher crimes to keep them away from the public, preventing further interactions with Kentucky’s most vulnerable population.

FDA GIVES GREEN LIGHT TO LAB-GROWN CHICKEN; USDA IS NEXT