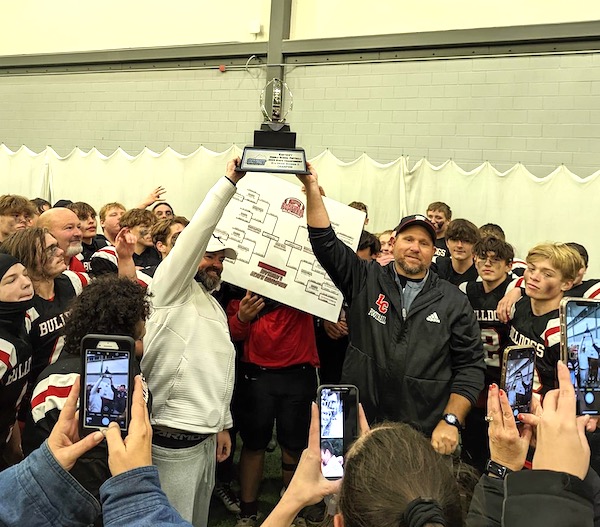 November 12th, 2022, Georgetown, KY — The first snowflakes of 2022 flew, and temperatures dropped significantly as the boys traveled to Georgetown, KY.  Despite the weather, a large contingent of Lawrence County faithful showed out, as the LC Middle School Dawgs put on a show for the history books. Coming into the game the Paducah Tornado team was undefeated and had a 40-point margin of victory throughout their path to the championship.  What they met on Saturday was something very different. The Tornado had met their match.

The eventual 2022 KYMFSA Division 2 Champion Bulldogs began the game on defense after winning the coin toss and deferring to the second half.  The Paducah Tornado’s first play from scrimmage would see multiple Bulldogs hitting the Tornado running back behind the line of scrimmage. That first play would set the tone for an entire game of domination on both sides of the ball. The Bulldogs defense would allow just a handful of first downs. The Bulldog offense scored at will.  Every single Bulldog player (36 in total) would see the field on Saturday in one way or another. 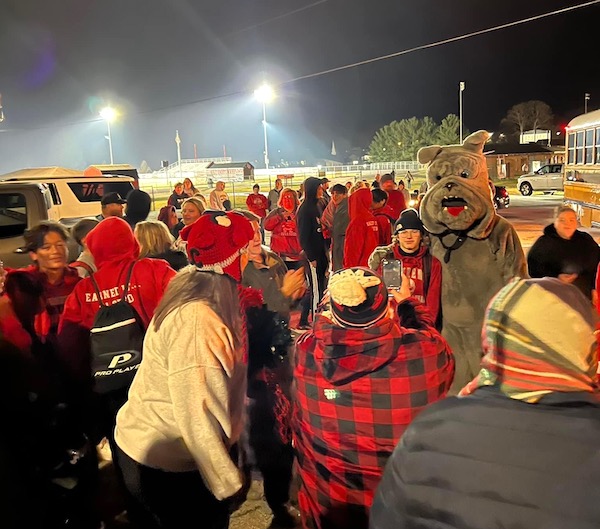 After stopping the Tornado’s on their first drive, Caven Williams scored 4 plays later with a 45-yard touchdown run.  Carlo Chicko then converted on a 2-point run to put the “Dawgs of War” up 8-0.  Another stop and Kaden Johnson scored on the ground from 16 yards out.  The next two touchdowns came through the air, Mitchell Frazier connected with Carlo Chicko for 2 touchdowns.  All the while, the Bulldog defense kept the Paducah offense behind the sticks. An onside kick and 2 Grey Derifield interceptions would keep the turnover margin in the Bulldogs favor as well. Kaden Johnson would score on the ground again and Mitchell Frazier had a 2-point conversion run.  The final touchdown of the game was a 16-yard run by newcomer Brandon Barrett. 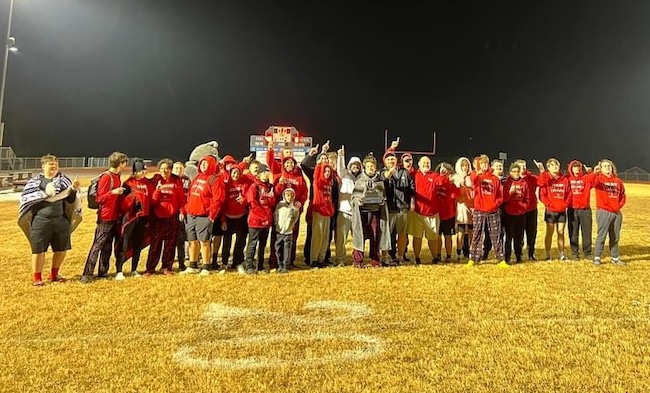 The Bulldogs Offense was led by Caven William’s 206 yards and one TD on the ground. Kaden Johnson had 55 yards rushing, 2 rushing touchdowns, and one reception.  Carlo Chicko had 3 catches for 91 yards and a 2-point conversion on the ground.  Brandon Barrett rushed for 26 yards and one touchdown.  Derifield would add 14 yards rushing as well.  Ty Brooks had one reception for 15 yards.  Mitchell Frazier would finish the game 5/9 for the game for 106 yards passing. He also ran in a 2-point conversion.  The Bulldog offensive line including Cameron Vanhoose, Ethan Preece, Chandler Preece, Colbie Prince, and Cameron Castle was dominant throughout the game.

The Bulldog fans were numerous, rowdy, and loud throughout the game.  The bus was escorted from the Interstate 64/US 23 junction by numerous fans, police, and other emergency vehicles.  The line of vehicles and lights seemed to stretch for miles.  More fans and a host of firetrucks would meet the parade of proud Bulldogs at the “birdhouse”.  Despite the cold, people were parked or standing along old 23 all the way to Luke Varney Memorial Stadium.  The field was lit, and the scoreboard read 40-0.  Hundreds of people and a Bulldog mascot were at the stadium to celebrate the win.  No one doubts the future is bright for the Bulldogs.

“… The best part of the game was that we were able to get every single kid on that field.  So many people made this possible, from our awesome bus driver to our administration. The PA joked that there wouldn’t be any lights on in Louisa KY tonight because everyone was at the game.

“… My coaching staff had our kids prepared they just went out there and executed.  When people from Lawrence County put their differences aside and buy into a common goal, this is what happens.  We can accomplish a lot because we are tough. What happened on our trip home with everyone waiting and cheering, our great first responders with their sirens on, it was just very humbling.  Our kids got to see how much Lawrence County loves and needs this game. Our kids worked their tails off, they learned so many lessons throughout the season that no one can ever take from them.  I am blessed to be a part of this.”