Huntington, W. Va. — The Lawrence Co. youth football league had a tremendous year with three teams playing in the Turf Bowl at Joan C. Edwards field on the campus of Marshall University Saturday. 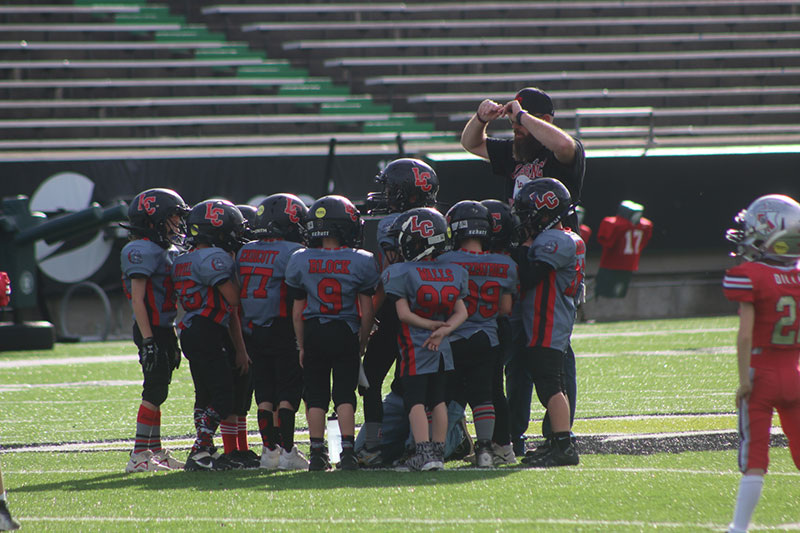 In the first game of the day the Knights scored a touchdown and added the two point conversion to beat the Bulldogs for the championship.

Bulldog linebacker #22 Colton Bentley was the leading tackler in the game. 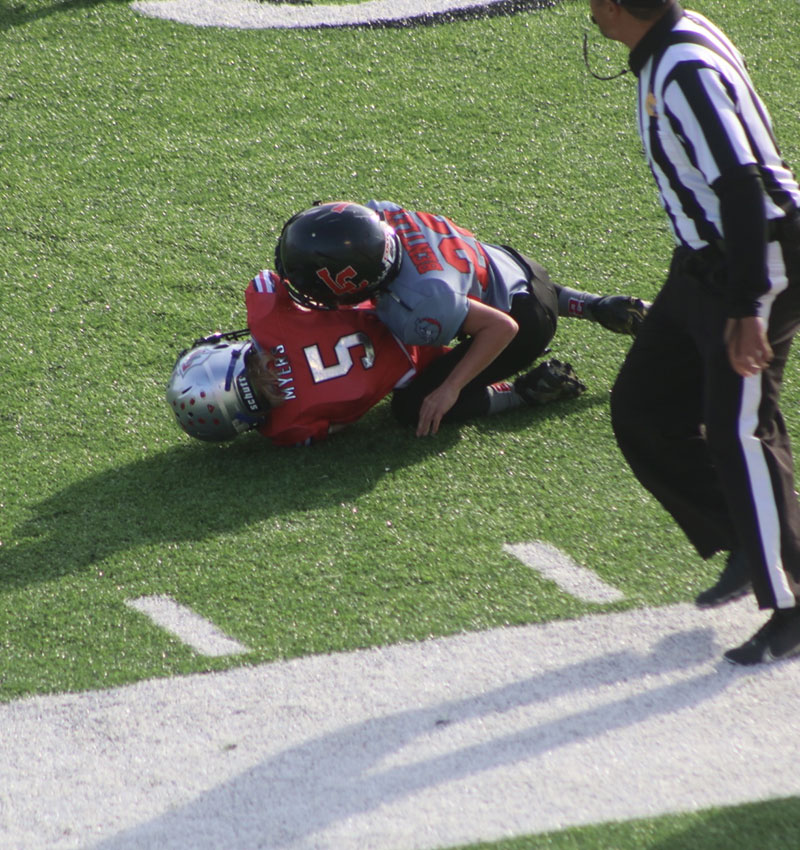 In the second game of the day it was the Knights winning a shootout to capture the title.

Brooks Parker caught a 71 yard touchdown pass to make it 6-0 Knights with 1:30 left in the first quarter.

Parker hit Easton Cole for a 3 yard touchdown pass to make it 12-0 with :08 second left in the first half. 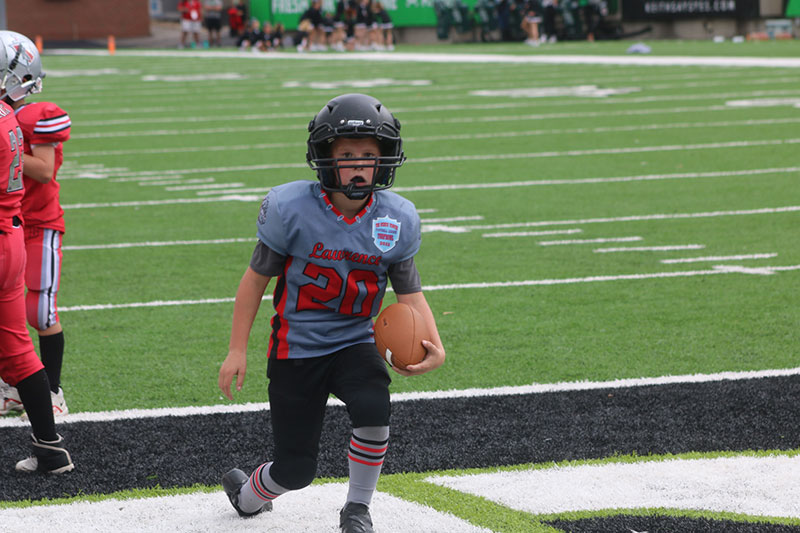 Lucas Block went 68 yards on the last play of the first half and added the two point conversion to make it 12-8 Barboursville at Halftime.

Parker went 71 yards for a touchdown with 5:32 left in the third quarter to give the Knights a 18-8 lead.

#44 Tucker Dixon fights his way toward the end zone versus Barboursville. 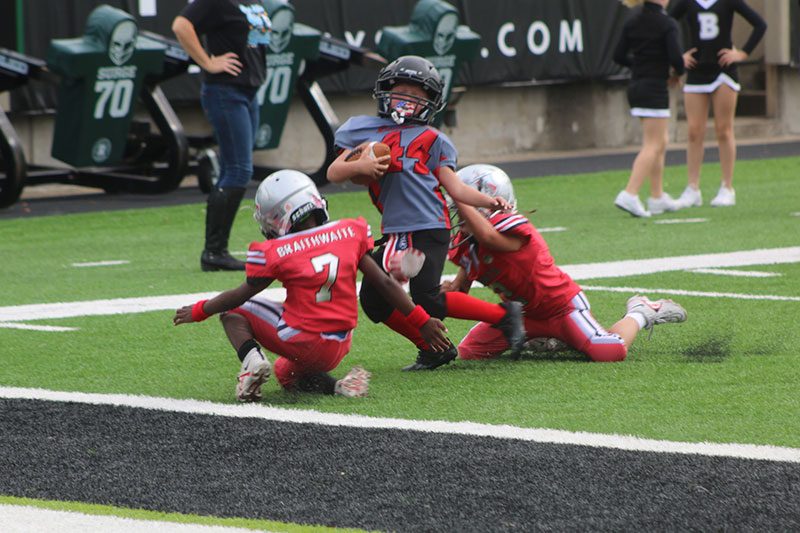 Tucker Dixon took it in from 1 yard out and Block added the two point conversion to make it 18-16 with 2:24 left in the third period.

Parker took it 60 yards for a touchdown and added the two point conversion to make it 26-16 with :58 seconds left in the third.

Parker added another touchdown this time from 42 yards out and tacked on the two point conversion run to make it 34-22 with 3:26 left in the game.

Block scored again this time from 16 yards out with 1:47 left in the game to set the final score of 34-28 Barboursville.

In the last game of the day Bulldog running back Mikey Artrip scored from 1 yard out and Carson Evans added the two point conversion to give Lawrence Co. a 8-0 lead with 1:23 left in the third quarter. 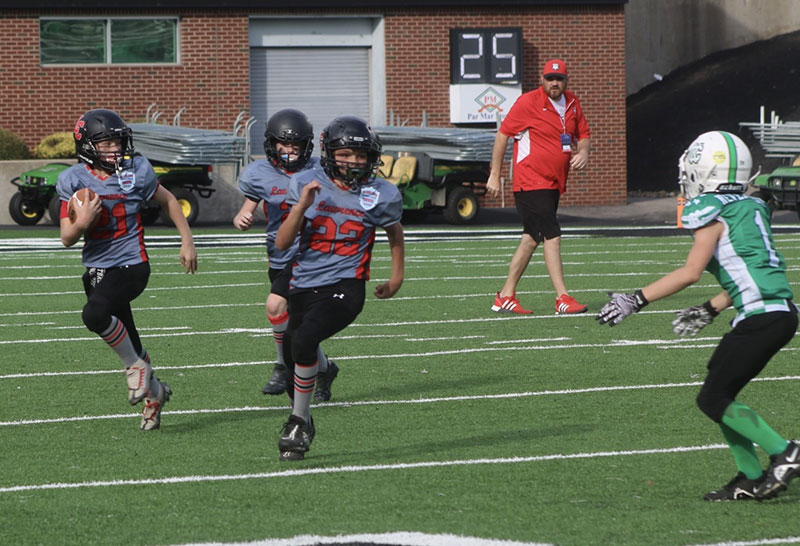 The Wonders answered back to make it 8-6 on a Cameron Booth 20 yard jaunt with 6:44 left in the ball game.

C-K forced a Bulldog fumble and Brody Watts went 50 yards for a touchdown and also added the two point conversion run for a 14-8 Wonders lead with 4:02 left in the game.

After forcing a turnover on downs Cameron Booth went 49 yards for a touchdown to make it 20-8 C-K with :20 seconds left in the game.

“… This year for LCYFL was a huge success. We had 193 kids sign up to cheer/play football in Louisa which is impressive in and of itself. The volunteer help Brianna and I have had since running the league has been nothing short of overwhelming.”

“… We couldn’t run a league like we do without the help of the LCYFL Board, coaches, and all of the volunteers. To take this program where we think it can go, we can’t settle for moral victories. We sent 3 teams out of 4 to the turf bowl, but came home empty handed. We aren’t going to celebrate second place finishes, we are going to keep working and growing to make it back next year and win.”

“… We’re incredibly proud of the effort put forth by this entire team. Everyone really embraced their roles on this team and they did their job to the fullest this year.

“… From each child to the coaches and especially the parents, everyone affiliated with this team has been truly #AllInLC. The Turf Bowl didn’t end up the way we would have liked but I am very optimistic about the future of Lawrence County when it comes to these young men. They have a drive and determination that every coach dreams to see and I’m proud to be associated with the 2022 C Team Bulldogs. This is not the last the tri-state will hear from these young men. Go Dawgs!”