2022 Tolsia Volleyball before entering the Charleston Coliseum and Convention center to take on #1 Williamstown in the state tournament. 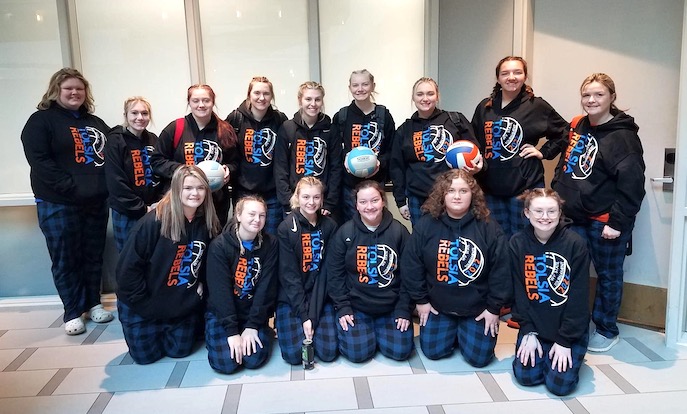 The Rebels ran into a buzzsaw in #1 seeded Williamstown ( 38-7 ) on Wednesday morning as the Yellow Jackets won the first set 25-13 against a Tolsia team who was at the state tournament for only the second time in school history.

In the second set Tolsia took an early lead before Williamstown pulled away for the 25-15 win. 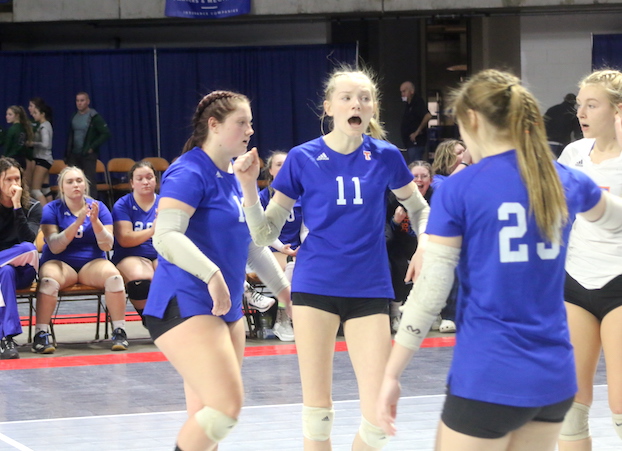 In the third and final set it was Williamstown winning the 25-16 and the match 3-0.

Williamstown went on to beat #5 Moorefield in the semifinals Wednesday night and then won the state championship over #2 Buffalo on Thursday afternoon.

#1 seed Musselman won Class 3A over #2 Morgantown and #2 Philip Barbour beat #1 Shady Spring in the Class 2A title game.

Senior Allyssa Ransbottom awaits the refs signal before serving in the State Tournament. 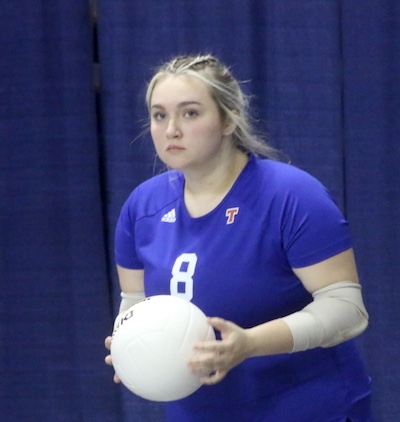 “… So proud of this group of ladies, we played a brutal schedule this season and they never wavered one time. They did everything we asked them to do all year long and for them to make it to Charleston to the big house is such a huge accomplishment for them and our program. Give Williamstown credit they are very good and earned the victory against us and the state championship as well. We played some tough teams this year in our area and that is why we made here. These girls are battle tested. Wayne was very good, Buffalo is always good, Sherman and Tug Valley as well as Lawrence Co. in Kentucky. Those teams getting better has made us better.”

“… I will miss my five seniors for sure, four of them have been four year players and started playing as a sophomore. Autumn Block is super athletic and her vertical is phenomenal and we have never had anyone quite like her. Ella Hatfield is someone that we can put anywhere on the floor and she has shown unbelievable leadership and maturity throughout. Natalie Sexton shows tremendous leadership on the floor and communicates so well while she is out there, keeps everyone up and is always so positive. Jada Salmons is phenomenal at the Libero position, she has worked her tail off to get better every year, she watches video and studies and wants to get better and I’m sure she has over 500 digs. Allyssa Ransbottom is our cheerleader and this season she has had to do it all. We have had some injuries and she has stepped in wherever we have needed her. She has played just about every position for us and done it well.”

“… We have a lot of good stuff going on at both middle schools, so that is huge for us at the high school level. We have former high school players at both programs and we are excited to see how they develop the young players. We have some good returnees from this team as well so the future is bright for Rebel Volleyball.