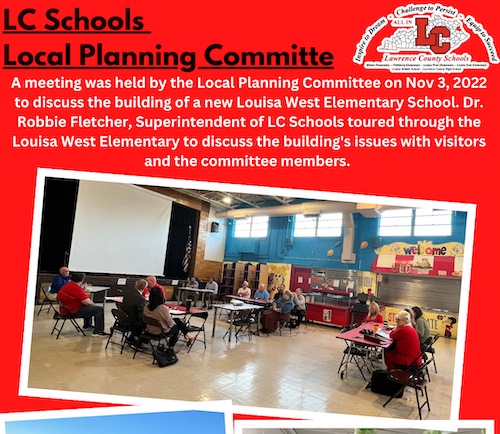 There were discussions of the building’s sloped hallway floors, plumbing in the restrooms, electrical conduit design, roof leaks, heating and cooling costs, along with many other problematic issues.  The LC Schools Local Planning Committee feels the sincere necessity to build a new Louisa West Elementary School.  The state also agrees with this determination, particularly since the estimate to remodel the old building would cost approximately 82% of the construction of a new school.

There was an open discussion about the current draft of the LPC plan.

Along with many other district-wide facility needs, the district facilities plan that has been submitted to the state includes a change in the grade structure in LC Schools.

The plan has Blaine and Fallsburg transitioning to P-6 buildings, with potential cafeteria and/or gymnasium additions.

The plan also includes a new Louisa West that preschool through 2nd grade with Louisa East having Grades 3 through 6.

Louisa Middle would become Lawrence County Middle School with Grades 7 and 8 only, while LCHS will continue to include Grades 9 through 12.  According to Dr. Fletcher, this would allow more career technical-type offerings for all middle school students because all 7th and 8th-grade students would be on Bulldog Lane with our high school.

Ms. Frasier brought forward a question to determine the need for a two-nickel tax, or double-nickel tax, in building a new Louisa West Elementary School.

According to multiple state legislators, if Lawrence County Schools do not receive the extra double nickel tax funds, the state will not provide the matching funds for the building of the new school.  LC Schools can only receive the matching state funding, in conjunction with a single or double-nickel tax going forward.

Also, with the rise of construction costs, building materials costs, and labor the LC Schools cannot build a new school without the help of extra state funding.  The double nickel tax is estimated at $100 per every $100,000 of owned property.

The Lawrence County Board of Education will vote to make a determination toward the tax at a later date.  (For clarification, an addition of one nickel in the property tax will not cover the estimates of a new building along with the purchase and preparation of the property for a new school.  Construction costs have increased tremendously since the COVID shutdown occurred.)

Dr. Fletcher offered to take guests that were not present during the public forum on a tour of Louisa West after the closure of the meeting. The meeting was adjourned by Mr. Matthew Maynard, LWES principal, with a motion and second from the floor.

Lawrence County Civil Suits for the week of  Nov 7-11, Deeds and Marriages