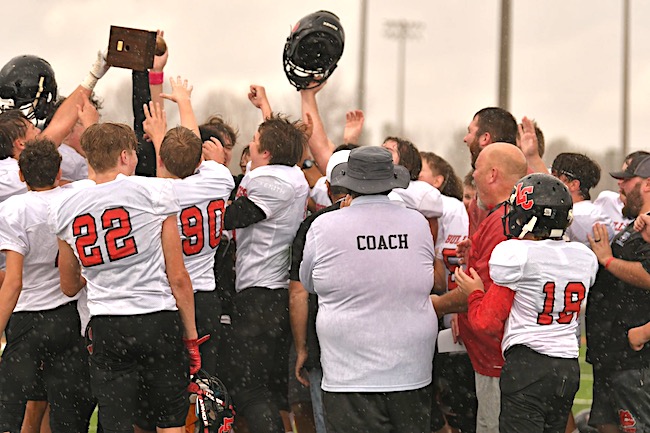 November 5th, 2022,  Berea, KY — The Lawrence County Middle School Football team got on the bus around 7am on Saturday to try and go make history.  The team travelled 2.5 hours to Berea to face perennial powerhouse Corbin in the KYMSFA state semifinals.

Several of the Bulldogs had been unable to practice during the week due to illness.  Many kids were ill and chose to play anyway. 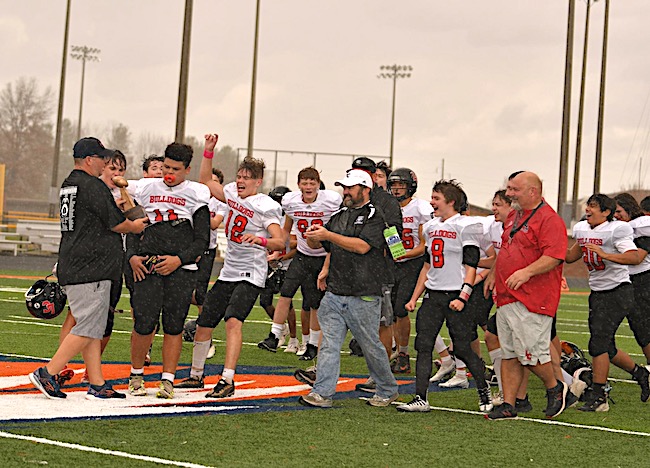 In the first half of the game, Corbin led 6-0 and the Bulldogs lost two-way star Hayden Blagg to a terrible leg injury.  The Corbin crowd was rowdy with cowbells and the Redhound defensive line “barked” throughout the first half leading to several false start penalties. The strong winds limited both teams from throwing long passes down the field. Everything seemed to be pointing in the direction of another trip for Corbin to the state championship game.

The Dawg defense had only given up one big play. Unfortunately, that play resulted in a touchdown and an injury.  On the other side, the Bulldogs offense had several successful drives but were stalled due to wind and penalties.  Bulldog head coach Tom Frazier says, “I knew my team was going to win the game. I honestly never doubted it.  We just had to clean some things up and continue to battle.”

In the third quarter, the Bulldog offense continued to drive, but could not find its way into the end zone.  The LC defense would make several stands causing a lot of frustration for the Redhound offense.  8th grade safety Kaden Johnson was all over the field, leading the team with 15 tackles in the game. In the fourth quarter, it was all Bulldogs.

The offense got in sync with Caven Williams darting down the field for a 30-yard touchdown run.  However, the Bulldog offense came up short on the 2point conversion.  The defense held the Redhound offense to < 20 yards in the 4th quarter, forcing them to punt on each drive.

Kaden Johnson wasn’t satisfied with just dominating on defense, he gashed the Redhounds on offense as well with several long runs. He often dragged Corbin’s players down the field with him. The Bulldogs scored on their second drive of the fourth quarter as well with a 40-yard pass from Mitchell Frazier to Ty Brooks.  However, the referees called that one back.

The game was tied 6-6 with only a few minutes left in the 4th quarter and Corbin had the ball.   After another shut down, the Redhounds were forced to punt (again). The Bulldogs had to drive the length of the field with less than a minute left in the game.  Despite the rain and the wind, Frazier delivered a 10-yard strike to Ty Brooks and another 15-yard dart to Caven Williams.

The bulldogs were at the 50 with 30 seconds left.   Bulldog quarterback Frazier threw a pass to Kaden Johnson, who then lateraled the ball to Caven Williams. He went streaking down the field and scored to put the Bulldogs up 12-6.  The cowbells went silent… Williams would then run it in for a two-point conversion.  The Bulldogs were leading 14-6.   After a dangerous kickoff return, Corbin would try and fail for the hail Mary.  The Lawrence County Bulldogs had done it.

They had earned a spot in history and a chance to play for its first ever State Championship.

The Bulldogs offense was led by Caven Williams who had 104 yards rushing, 1 rushing touchdown and a two-point conversion on the ground.  He also had 2 catches for 65 yards and a touchdown.  Kaden Johnson had 87 yards on the ground (along with the game winning lateral) and Carlo Chicko had 50 yards rushing.  Chicko also had 2 catches for 20 yards.  Ty Brooks had one catch for 10 yards. Frazier had 100 yards passing and one touchdown through the air.