LOUISA, KY. — Far removed from election in past years, the 2022 General election has few actual races because of the dominance of the Republican Party during the Donald Trump years and looks even stronger this year with a sizable lead in registered voters, 6,400 GOP to 4,800 thereabouts Dems.

Lawrence Clerk Chris Jobe said this week that absentee voting has been “slower” than past years, a possible reflection of what is to come today through next Tuesday. “You just can’t really tell by this because it has been a little confusing with early voting and all,” Jobe told The Lazer.

Jobe said today there were just under 300 ballots cast at the courthouse today (first day) and absentee ballots. He said the county has a 55-45 Republican advantage in  registered voters with almost 500 Independents.

But Jobe was echoing what most politicks watchers are mumblings this year despite the fact that one of the most important offices in the three county District of Lawrence, Johnson and Martin Counties — Circuit Judge — is on the ticket, the YES/NO vote on the two Constitutional Amendments, especially #2, which changes the language of the Kentucky Constitution concerning abortion is drawing voters to the polls. 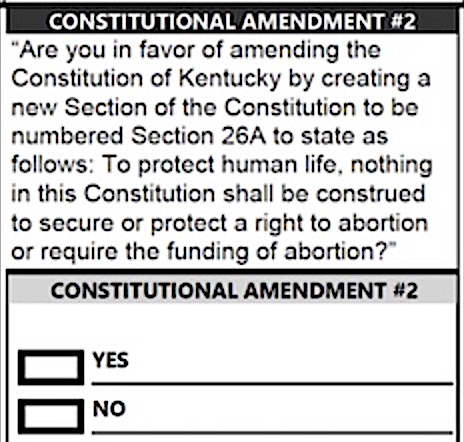 “I spoke to the clerk in a neighboring county today and he said the turnout today was much better than expected and that the hot item is the Amendment vote,” Jobe said.

Lawrence Countians are voting ‘no’ on both according to our totally unscientific and mostly overlooked these days, Lazer poll.

Back to the top three

The Circuit Judge is in charge of the judicial system in District 24, which touches everyone’s lives in one way or another.

According to the Kentucky Administrative Office of the Courts, “Circuit Court is the court of general jurisdiction that hears civil matters involving more than $5,000, capital offenses and felonies, land dispute title cases and contested probate cases. Circuit Court has the power to issue injunctions, writs of prohibition and writs of mandamus and to hear appeals from District Court and administrative agencies.”

Former judge John Kevin Holbrook, 56, of Paintsville is seeking the 8 year term on the bench and is running as the most experienced candidate. He sounded like he is very astute in the workings of the circuit judicial system.

” I decided the district needs an experience level headed candidate for this very important position,” Holbrook told The Lazer. “It’s very important to elect the right person to take over since Judge Preston has decided to retire after 3 terms. It motivated me to seek the position after a brief retirement.”

Opposing Holbrook is David Matt Runyon, also of Paintsville, currently chief assistant in Commonwealth’s Attorney Tony Skeans’ office since 2018. Runyon is the grandson of Circuit Judge James A. Knight who served in the 1990’s. he says he is ready for the job.

Didn’t get the chance to speak to Runyon but from messages and other sources he is chomping at the bit to take on the tri-county area’s judicial district.

He obviously knows the system having grown up around it all his life. He also emphasizes his energy and ability to get the 24th district job done.

“I’ll be a judge who is firm, but fair, and I’ll treat everyone with dignity and respect,” said Runyon.

“It would be the honor of my life to serve the people as circuit judge, and I will work hard for them every day if elected,” he said.

Another race on the ballot for Louisa Voters is for the Louisa City Mayor’s position currently held by Harold Slone who is opposed by James Pauley-Barker and James “Jimmy” Marcum, and the six seats on the city council.

Slone is the obvious favorite but you never know in Louisa, Pauley- Barker may surprise.

Six incumbents for city council and two more campaigning to be included looks strange after years with no choices and scrambling for candidates. Now Louisa voters have two extra names to consider. Lot of small factions of different sorts involved here so too close to make a prediction.

BTW, The circuit judge , mayor and city positions are non-partisan.

Other races to watch:

With less than 400 showing up the first day of early voting at the courthouse out of all eligible voters, the pace is expected to increase today, Saturday Monday and election day.

I voted yesterday at the courthouse, wait wasn’t long and you can vote from 10 – 6 Fri., Saturday and then 6-6  on election day in seven locations in the county. 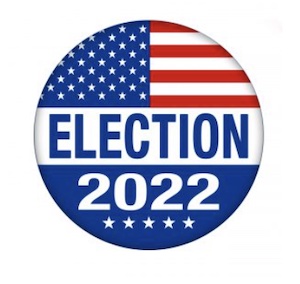 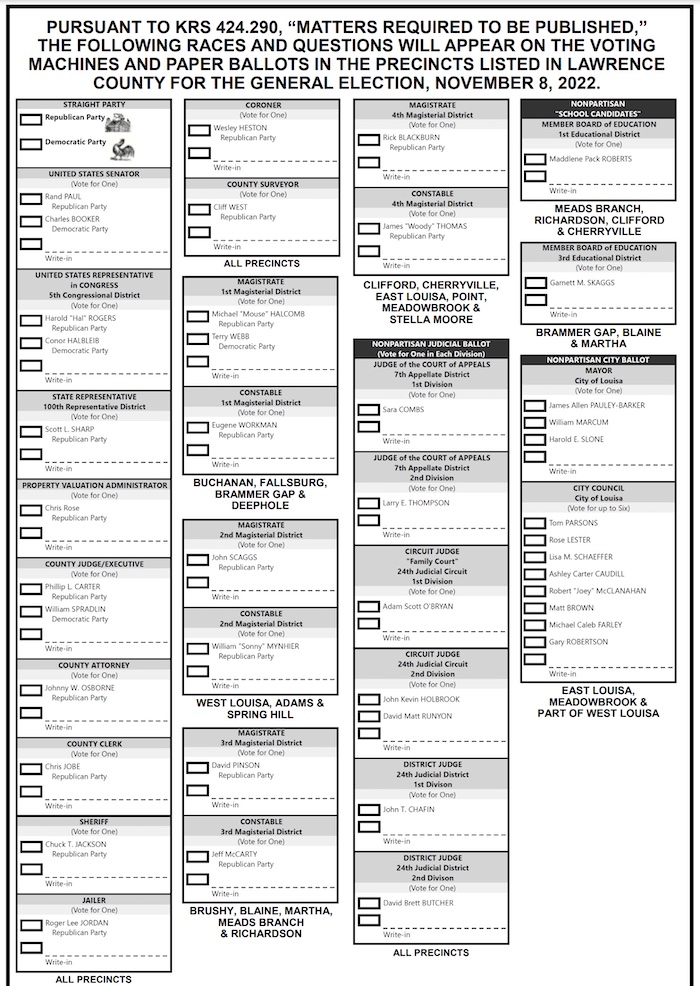