LAWRENCE COUNTY MAN ARRESTED AFTER STRIKING ANOTHER MAN WITH MACHETE

APPARENTLY 20 DOLLARS IS ENOUGH TO NEARLY GET YOUR HEAD CHOPPED OFF IN THIS TOWN!! 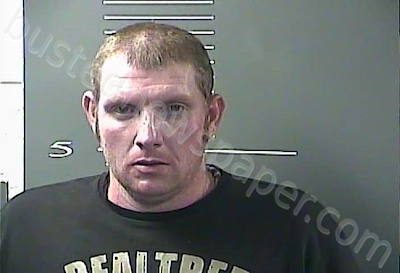 LACY JAMES HALL,33, OF LOUISA, KY., WAS ARRESTED DURING THE ALL HALLOWS EVE WEEKEND, AFTER STRIKING A MAN IN THE SIDE OF THE HEAD WITH A MACHETE, DUE TO A ‘FINANCIAL AND/OR WEED DISPUTE’.

A Lawrence County man was arrested on early Saturday evening, October 29, after he allegedly attacked another male individual with a machete, in an act of violence straight out of a slasher horror movie airing on any participating cable channel running a Halloween holiday themed movie marathon.

Lacy James Hall, 33, of Louisa, was arrested and was charged with:

According to the police arrest report, Lawrence County Sheriff deputy Tyler Laney responded to Blackberry Avenue in reference to an assault with a weapon. While he was on the way to the scene, deputy Laney was advised that the victim had been cut in the head with a machete by Hall.

When deputy Laney arrived, he observed a large cut on the left ear lobe of the victim, who stated that Lacy Hall had been asking him for $20 all day and that he yelled at him and told him he didn’t have it, the report said.

Lacy Hall then pulled out a machete and hit him in the side of the head with it, the arrest report said.

The injured victim drove himself to Three Rivers Medical Center for treatment, and deputy Laney went next door to Lacy Hall’s home, the arrest report said.

Lacy Hall stated that he had the machete in his hand but does not remember hitting the victim with it, telling deputy Laney that he would ‘never do that’.

Lacy Hall stated to deputy Laney that the victim came into the home, yelling at him and shoved him, and that he told the victim he needed to get rid of his marijuana plants in front of his house because he didn’t want to get in trouble, the arrest report said.

While talking to Lacy Hall, deputy Laney observed spots of blood on his left shoe, the arrest report said.

Deputy Laney arrested Lacy Hall for first-degree assault and seized his shoes and machete for evidence, the report said.Lacy James Hall was taken into custody and was transported to and was booked to be lodged in the Big Sandy Regional Detention Center in Paintsville, KY., in Johnson County.

Hall posted his bond sometime afterwards, and he was released from the BSRDC jail on Monday evening, just in time for Halloween trick & treating.