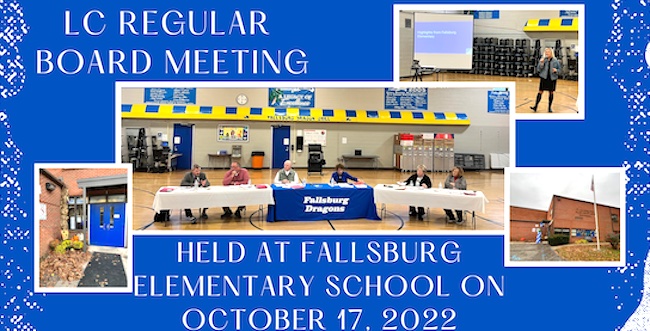 A regular meeting of the Lawrence County Board of Education was held at Fallsburg Elementary School in the gymnasium on October 17, 2022, at 6:00 PM. Board members Jim See, Garnett Skaggs, Maddlene Roberts, Barbara Robinson, and Chairman Heath Preston were all present.

The meeting was called to order by Chairman, Heath Preston.  There was a motion to approve amending the agenda, which passed.  Ms. Sara Kise, Fallsburg’s Principal, gave a PowerPoint presentation on various learning programs used within the school.  Programs mentioned included social/emotional learning (SEL), reading recovery, and PACE.

Dr. Robbie Fletcher gave the superintendent’s update.  Dr. Fletcher relayed state testing results will be made public on October 18, 2022.  (See Lazer story and results) The board decided to set a special meeting to discuss the testing scores for LC Schools.  The date of the special meeting will be announced once determined by the LC Board.

The LC Local Planning Committee held its third meeting on October 11, 2022, which included a public forum.  There were no community members present from the invitation issued through a public notice in the local news media outlets.  The next Lawrence County Schools District Local Planning Meeting will be held on November 3, 2022, at Louisa West Elementary School with an invitation to all for a public forum at 5:00 PM.  All community members are encouraged to attend the forum.  The regular meeting will resume at 5:30 PM or the conclusion of the public forum.

There was a discussion during the LPC meeting on the topic of changing the configuration of the grade levels within the six-county schools.  Many discussed that sixth-grade students are not physically or emotionally ready to be enrolled with 7th and 8th-grade students.  The new configurations would allow FES and BES to become P-6 grades.  LWES would become a P-2 grade school.  LEES would become a grades 3-6 school.  Louisa Middle School would transform to Lawrence County Middle School, with grades 7-8.  LCHS would remain with grades 9-12.  The committee will continue its discussion on the topic.

Construction has begun on the softball fieldhouse facility. There is optimism that construction will be ahead of schedule.

The Local Superintendents’ Advisory Council, chaired by Dr. Fletcher, discussed charter school regulations authorized by representatives of the KDE.  The council discussed the funding of charter schools may be unconstitutional and that those taxpayer dollars should not fund private schools in KY.  Dr. Fletcher is also a co-chair of the KASA’s Sustaining the Education Profession. This committee seeks to help in the retention of teachers, compensations and benefits, working conditions, incentives, and instructional support.

The monthly financial report was given by the finance officer, Brandi Vanhoose.  The beginning balance was $12,369,812.  The total revenue for September was $1,554,837.  The total expenditures totaled $3,078,811.  The expenditures exceeded revenues due to having three payrolls during the month.  The ending balance for all funds for the month of September was $10,969,470.

Darrell Blair of Wells & Company, P.S.C., gave a report to the LC Board of Education about the annual financial audit for the 2021-2022 fiscal year.  There was a motion to accept the report by Maddlene Roberts and seconded by Barbara Robinson.  The motion was approved.

In the Consent Agenda items included Top Hat Marketing Inc. for the Red Ribbon Week magic show for LWES and LEES.  Also, an affiliation Agreement between LCHS and TRMC for the Biomedical job shadowing program.  Requests include an Out-of-State trip to the Carolina Invitational, Charleston, SC on December 28-30, 2022, for the LCHS Girls and Boys Basketball teams.  Also, for an out-of-state trip for the LCHS cheerleading team for the UCA Cheerleading Nationals in Orlando, FL.

An update on the LCHS Vocational Education Center was given by Dr. Fletcher.  The monies provided by the state totaled $9.28 million.  Due to the rise in the cost of materials and labor, the $9,280,000 will not complete the building of the vocational center, remodel the old vocational center at LCHS, and build the proposed greenhouse.  There is the discussion that perhaps the state might provide additional funding to complete the facilities.  The wait time could be up to at least a year, for the state legislature to approve or deny additional funding.  There are discussions to invest the $9,280,000, which could yield an extra $400,000 to the building fund.  It was revealed other school districts have utilized the option to invest funds, to gain additional monetary funds.  The LC Board would have the final decision on the approval or denial of this matter.

There was discussed the proposition of LCHS Football Field upgrades.  LC Head Coach, Alan Short was present, along with Dr. Tom Frazier, and other parent representatives at the board meeting.  Coach Short advocated for the football field turf upgrade on behalf of the community and student team players.  Dr. Fletcher and Coach Short also discussed how the soccer teams could also utilize the field.  The game lines would be changed depending on the need of each sport.  There was a discussion on the funding of the turf.  It was confirmed the funding may be supplied through a construction bond through House Bill 678, which will end in 2024.  The funding will not come out of the general fund.

The LC Board made a motion and approved the Superintendent’s Personal Growth and Evaluation Update.  Dr. Fletcher discussed that LC administrators are encouraged to apply for state and national committees to be influential and bring back learning initiatives/tools for our schools.  There is also high importance placed to promote social and emotional learning for LC students’ overall well-being.