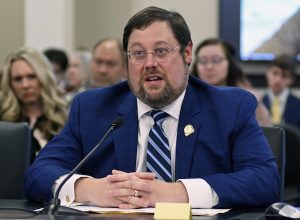 VOTE YES FOR CONSTITUTIONAL AMENDMENT #1 ON THE

April 10, 2020 is a day that will live in infamy in the Commonwealth of Kentucky.  On that date Governor Andy Besheaer ordered the Kentucky State Police to arrest any churchgoers violating his mandatory quarantine orders the following Sunday.  I can remember well the pleas of many of my constituents; begging me and other members of the General Assembly to step in and block the Governor’s overreach.  Yet we as Senators and Representatives were powerless to stop Governor Beshear having adjourned two days prior on April 8, 2020.

Did you know that Kentucky has some of the most restrictive constitutional limitations on when the General Assembly can gavel into session of any other state in the nation?  Not only are other states in continuous session or have full-time legislators, but most state assemblies have the constitutional authority to call themselves into session if needed. Kentucky is one of only 14 states in which only the governor can call the legislature into session. In Kentucky, the General Assembly is a part-time legislature, only convening for one 60-day session during even numbered years, and one 30-day session during odd numbered years.  Being a part-time legislature had its historical advantages, as most legislators 100 or more years ago had businesses in their districts, which they had to leave to travel the long distance to Frankfort.  I am still in favor of a part time legislature since I feel that it keeps Kentucky’s legislators close to the people and prevents the emergence of a professional political class beholden only to lobbyists and big business.

When in session, the Commonwealth has three functional branches of government, each keeping the other in check, as both our federal and state constitutions were designed to do.  The issue arises when the General Assembly is not in session, and has no ability to return during times of emergency or to prevent overreach by other branches.  As previously stated, a prime example of this was with the current Governor who, as we experienced in 2020 and 2021, exercised unchecked power with mandated closures associated with COVID-19.

It is unnecessary to our state’s operation for the Governor to possess the magnitude of power our state constitution currently provides.  We no longer live in the horse and buggy days of the last constitutional convention when it was difficult and inefficient for the General Assembly to convene promptly.  In 2022, the General Assembly can gather quickly. It is especially important for the people’s branch of government to be part of the decision-making process when our state’s economy or issues surrounding freedom and liberty hang in the balance.

The state Senate actively worked with the state House of Representatives on House Bill 4, which established the parameters for a constitutional amendment to permit the General Assembly to call itself into Special Session when the need arises. It passed the General Assembly during the 2021 session with support from both Republicans and Democrats. Constitutional Amendment #1 will appear on the November 8 general election ballot.  It would:

These minor changes to our state’s constitution will meet the changing demands of modern times and bring a much-needed rebalancing to the branches of government. In the future, if a Governor attempts to misuse his perceived constitutional authority, the General Assembly would be empowered to immediately respond legislatively to that overreach.

The decision now falls to the voters in the Commonwealth. Ultimately, I hope you will vote “yes” on this amendment and grant the General Assembly authority to call itself into session for limited time frames throughout the year.  This will enable your General Assembly to, as needed, check the power of the Governor or respond to the needs of the people of this great Commonwealth that require immediate attention.

I urge you, the voters, to ratify this important constitutional amendment and vote yes on #1 on November 8.

The ballot text for this constitutional amendment is long and I encourage you to read it completely here, https://apps.legislature.ky.gov/law/acts/21RS/documents/0027.pdf and contact my office with any questions you may have at 1-800-372-7181 or email me at Phillip.Wheeler@lrc.ky.gov.

Senator Phillip Wheeler, R-Pikeville, represents Kentucky’s 31st Senate District, including Elliott, Johnson, Lawrence, Martin, and Pike Counties. Wheeler is vice-chair of the Senate Standing Committee on Economic Development, Tourism, and Labor. He also serves as a member of the Senate Standing Committees on Transportation, Natural Resources and Energy, Judiciary, and State and Local Government. Additionally, he is a member of the Capital Planning Advisory Board. Lastly,  Wheeler was recently appointed to the Benefits Cliff Task Force during the 2022 Interim. For a high-resolution .jpeg of  Wheeler, please visit:https://legislature.ky.gov/Legislators%20Full%20Res%20Images/senate131.jpg