DAWGS EXPLODE PAST PIKE CO. CENTRAL; BELFRY UP NEXT

The Bulldogs have won five in a row and moved to 2-0 in Class 3A District 8 action.

Kaden Gillispie races to the end zone for a Bulldog touchdown Thursday. 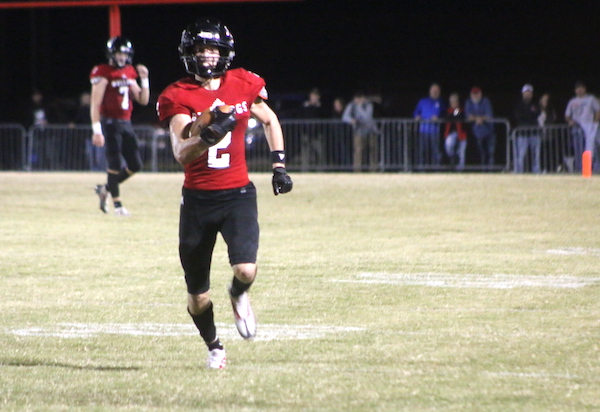 The Dawgs scored first on a Talan Pollack 24 yard touchdown pass to Kaden Gillispie and Dylan Ferguson added the two point conversion run with 7:07 left in the first quarter.

The Hawks tied it up on a Matt Anderson 1 yard touchdown and Anderson hit Issac Blankenship for the two point conversion to make it 8 all with 1:32 left in the first quarter.

From then on out it was all Lawrence Co. as the Dawgs scored 40 straight points in about 8 minutes of action.

Talan Pollack crosses the goal line for one of his three touchdowns versus Pike Co. Central Thursday. 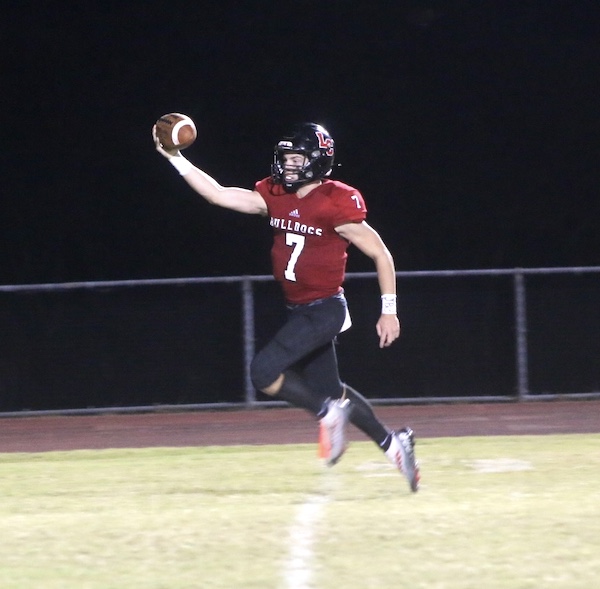 Talan Pollack raced 57 yards to the house and then found Gillispie for the two point conversion to make it 16-8 with :34 seconds left in the first quarter.

Gillispie went 58 yards for a touchdown and Cody Crum tacked on the two point conversion to make it 24-8 with 10:47 left in the first half.

Pollack scored from 41 yards out and Ferguson added the two point conversion and it was LC 32-8 with 7:55 left in the first half.

Ferguson galloped in for a 75 yard touchdown and Lawson Baisden added the two point conversion and it was 40-8 with 5:33 left in the first half.

LC all-state candidate Dylan Ferguson breaks through the line on his way to a 75 yard touchdown run. 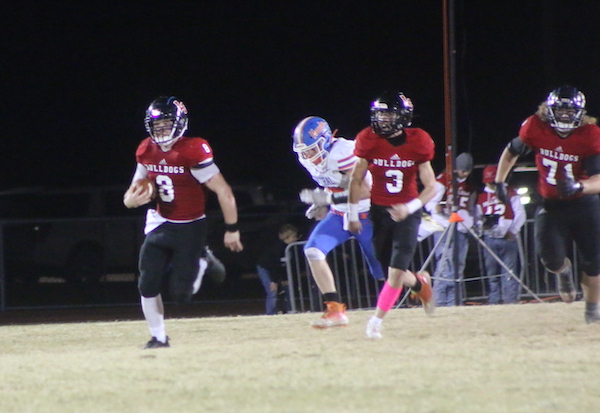 Pollack scored for the third time on a 28 yard touchdown and William McDavid set the final score of 48-8 when he tacked on the two point conversion with 4:30 left in the first half.

Lawrence Co. will play for a District title next Friday night AT HOME versus Belfry ( 4-3 ) who was off this week. 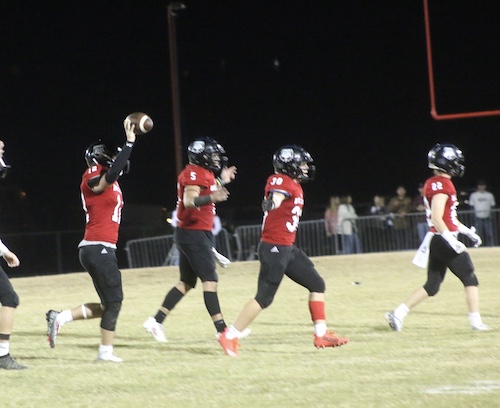 “… Very proud of our team. Fall break can sometimes be challenging, in terms of keeping a team focused. These guys spent the week focused on the task at hand in playing Pike Central. They didn’t look ahead and I believe the results of last night’s game reflected the week of practice which we had.”

“… Talan Pollock continues to improve each week. He exploded last night. As we continue to go through our season, we will continue to put more on his plate.”

“… To score 48 points on only 12 plays speaks volumes about our offensive team and our explosive potential. Our team continues to amaze our staff with their selflessness.”

“… Defensively we were on our keys and did an outstanding job tackling legs. We knew Matt Anderson was very talented and did a good job limiting him. Cody Crum made a huge tackle on him early in the game, that I believe changed the game.”

“… Proud that we were able to come out and do what we needed to do and didn’t look ahead to next week. Before the start of the season, this team set a goal of winning a district championship. We will get the opportunity to play for one next week. Our team’s mindset is that we expect to win. We are excited about the opportunity. Should be a great atmosphere next Friday night in Louisa.”