Belfry, Ky. — Junior Blake Maynard became the all time leader in goals scored in a 8-0 Lawrence Co. victory over Pikeville in the first round of the 58th District tournament at Belfry on Tuesday. 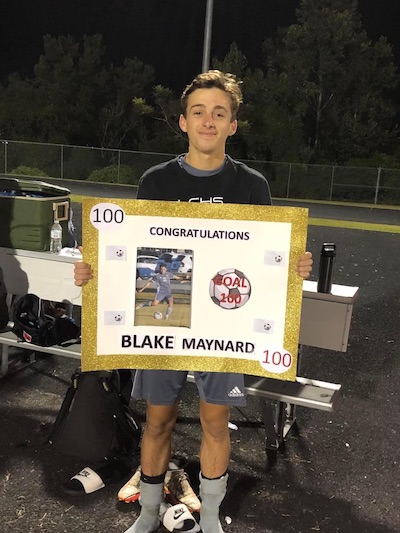 Maynard scored four goals in the victory and now has 104 in his career as he past recently graduated Luke Johnson who had 103 career goals.

“… Pikeville really came out in the first half ready to play. They keep the score close and attacked. It was a better team than when we played them last week. Our guys just kept grinding away and pressuring the ball and finally found the back of the net. We had a very balanced game offensively and defensively. Everyone played very disciplined including the guys off the bench. We are all looking forward to the championships tomorrow and regions next week.”

“… I was very proud of the game the whole team put together. I would also like to recognize an individual accomplishment of Blake Maynard. He hit two milestones last night in the win. He became the second player in LC history to score 100 goals and that puts him in the top 25 scorers of all time in KY. He also took over for most career goals scored at LC. He had 4 goals last night which puts him at one more than Luke Johnson at 103.”