FORMER KY. REPUBLICAN STATE REPRESENTATIVE & CANDIDATE FOR KY.GOVERNOR IN 2019, ROBERT GOFORTH, GETS OVER 2 YEARS IN FEDERAL PRISON FOR FRAUD AND MONEY LAUNDERING

GOFORTH WILL ALSO HAVE TWO YEARS OF SUPERVISED RELEASE AFTER HE FINISHES HIS PRISON SENTENCE, 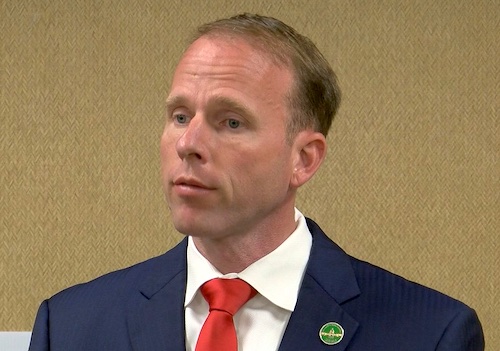 FORMER KY STATE HOUSE REPRESENTATIVE, REPUBLICAN GOVERNOR CANDIDATE, AND SOON TO BE A RESIDENT OF A U.S. PENEITARY, ROBERT GOFORTH.

Former Kentucky State Representative Robert Goforth, 46, of East Bernstadt, KY., who finished in second place in the election race in May 2019 for the Republican nomination for Kentucky Governor against the then Republican incumbent Governor Matt Bevins, was sentenced to two years and one month in federal prison for health care fraud and money laundering.

The Lexington Herald-Leader reported a federal district court judge imposed the sentence on Monday against Robert Goforth in Laurel County at the federal courthouse in London, KY.

U.S. federal court records showed that in May 2022, Robert Goforth pleaded guilty to admitting that a Clay County, KY. pharmacy that he owned billed insurance companies along with Medicare and Medicaid, for prescriptions customers did not pick up at his pharmacy.

Goforth will also have two years of supervised release after he’s out of prison.

“I am ashamed of myself,” Roebrt Goforth told the U.S. federal judge in his sentencing hearing on Monday. “I tried to be a good role model, and all of the work I did will be tainted forever by the decisions I made to commit these crimes.”

Robert Goforth resigned from his seat in the Kentucky House in August 2021, citing “family and personal circumstances that demand my full attention and focus” in his resignation letter.

Mr. Goforth was already in criminal trouble in a completely separate legal case, as he was facing domestic violence charges stemming from an incident involving his wife back in April 2020. This was the second court case that Goforth was sentenced in this year. He previously faced charges in state court of first-degree strangulation and fourth-degree assault stemming from an incident that involved his wife, according to court records.

Robert Goforth sought re-election despite his indictment, and was condemned by a number of pro-family groups, including Kentucky for Strong Families. Goforth was re-elected in 2020 with 70% of the vote. He resigned from office in August 2021, while still facing those charges

According to police reports, Goforth’s wife told police that Robert Goforth tried “to hog tie” her during a domestic dispute, according to court records. She said he grabbed an ethernet cable from a kitchen drawer, wrapped it around her neck while she was face down on the floor, and strangled her to the point she was having trouble breathing, according to the citation. Goforth’s wife later said she didn’t want to pursue prosecution against him. Goforth pleaded guilty to fourth-degree assault on July 14. The strangulation charge was dismissed.

Under the plea deal, Judge Michael Caperton sentenced Goforth to 59 days in jail to be served at the same time as his sentence in federal court.

Robert Goforth is ordered to report to the U.S. Marshall’s office on November 18 to begin his prison sentence. The judge suggested he serve his sentence “close to home” at the Federal Prison Camp in Manchester, or Ashland. Goforth, a Republican, represented Jackson County and parts of Laurel and Madison counties in the state House before resigning in August 2021.

To read more about the federal court sentencing of Robert Goforth, can go to the story by clicking  HERE.