Defensive coordinator Zach Botkins talks to his defense after a recent victory. The unit has been outstanding all season and is only giving up 15 points per game. 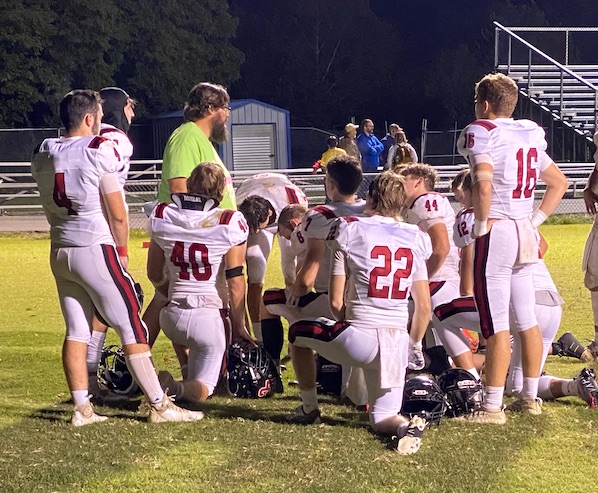 The Bulldogs had the ball only five times the entire night but they made those possessions count with two touchdowns and a kneel down to end the game.

Boyd Co. ( 3-4 ) held the ball for the first eight minutes of the game before taking a 7-0 lead on a Josh Thornton 1 yard touchdown pass from Rhett Adkins on fourth down and Cole Thompson batted the PAT.

Ferguson capped off a Bulldog drive with a 3 yard touchdown run and Logan Southers tied the score at 7 with the PAT kick with 7:16 left in the first half. 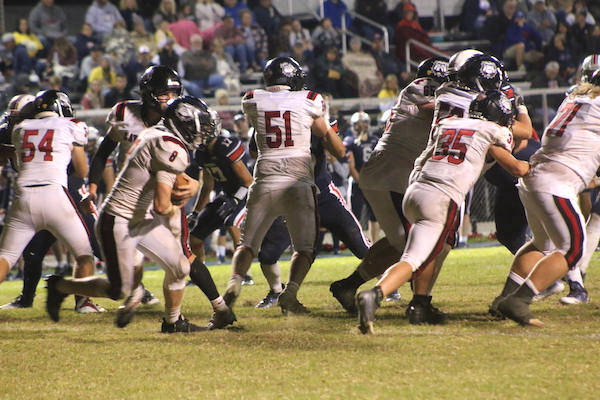 The Lions took a 10-7 lead on a Thompson 29 yard field goal as time expired in the first half.

Ferguson scored the only points of the second half on a 1 yard touchdown to set the final score of 13-10 with 2:33 left in the third quarter.

The Bulldogs will return to action Thursday night at Luke Varney Jr. Memorial Stadium versus Pike Co. Central ( 2-4 ) in a District showdown. The Dawgs have played 5 out of 6 games on the road to start the season.

“… It was a tough game for us, Boyd Co. has a quality program and the coaching staff does a great job. Any time you can win a close game it will help us down the line when playoff time rolls around. It was a big win for us.”

“…They are focused every week, In a game like this where possessions were limited, it was hat tip to Boyd County for keeping our offense off the field. It speaks volumes about our kids and the resiliency they kept showing all night long.”

“… I thought our defense really executed in the second half. We had a good game plan coming in. All of our backs ran hard and they know the guys up front doing their job makes it possible for them to produce.”

NEWSPAPERS MOSTLY ONLINE THESE DAYS, BUT AS ESSENTIAL AS EVER