HOGANS' SENTENCING DRAGS ON ALL DAY IN U.S. DISTRICT COURT...

UPDATE : A person attending the trial of Joy and Mike Hogan today said Judge Gregory Van Tattenhove finally made a decision this evening and levied prison terms for both defendants.

The Lazer connection at the trial said Michael Hogan was given a 41 month prison term and Joy Hogan a sentence of one year and a day. Michael Hogan will have to pay an undetermined amount of restitution. 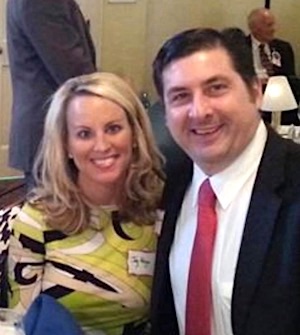 FRANKFORT, Ky. — The sentencing phase of former Lawrence County Attorney Mike Hogan and his wife, Joy, took place today in Frankfort but the attorneys in the case did not complete their arguments before business hours of the court’s clerk were over.

A clerk in the office said there were “quite a few” evidentiary witnesses this morning and the lawyers were presenting more information this afternoon. He said sentencing hearings “usually don’t last this long” and he “did not know if the judge will try to finish this evening or recess until Wednesday morning.”

But The Lexington Herald-Leader had a reporter at the meeting who wrote a lengthy story about the Hogans and the sentencing this morning. SEE FULL STORY HERE

Here is a snippet from the story.

“…The prosecutor, Assistant U.S. Attorney Kate K. Smith, said in a sentencing memorandum that the the improper payments from the tax account to Joy Hogan totaled at least $379,458.

The most any other employee received in bonuses during the same period was about $10,000, according to the memo.

Mike Hogan also over-billed the taxpayer-supported program to collect child support by at least $232,127, for a total loss from the two schemes of $611,585, the memo said.

Employees in the child-support office couldn’t cash their checks at times because it didn’t have enough money, even as Hogan overbilled for his work “knowing his employees could not cash their own paychecks,” Smith said in the memo.

The court reporter also said there won’t be any official news about the sentencing until tomorrow morning anyway because the judge was still talking and everything has to be transcribed. Reporters from large news organizations did not check in with the clerk’s office today, the clerk said, but may have been in attendance in the courtroom to get the news as soon as the judge pronounces.

The Hogans were scheduled to be sentenced on Wednesday, July 6, butVan Tatenhove granted Michael Hogan’s request to delay the proceedings and set a new sentencing date of September 27.

According to the Hogans’ plea agreements, the Hogans conspired with each other to commit wire fraud by issuing checks from a second delinquent tax account for the Lawrence County Attorney’s Office, the statements for which went to their personal residence. Michael Hogan and Joy Hogan would routinely prepare “bonus” checks issued to Joy, and signed by Michael, paid with delinquent tax funds that should have been used on operating expenses for the Lawrence County Attorney’s Office. The Hogans deposited these checks in Joy’s personal account and the couple’s joint accounts and spent the funds on personal expenses. Michael Hogan admitted he personally benefitted from these payments and knew some of these payments were not reasonable in amount, nor beneficial to the public. According to the indictment, between March 8, 2013, and April 30, 2020, Michael Hogan paid Joy Hogan more than $365,000 from the Lawrence County Delinquent Tax Account which comes to about $52,000 per year.

Additionally, Michael Hogan also admitted to defrauding the Lawrence County Child Support Enforcement Office, part of the Kentucky Cabinet for Health and Family Services. According to the plea agreement, Hogan billed the program for more hours than he actually worked.

As part of the plea agreement, Michael Hogan agreed to resign as the Lawrence County Attorney.

The Hogans were indicted on the charges in June 2021.