Vice President of Rotary Club Thomas (Tom) Bradley welcomed Rotarians and Guests and had Prayer, Pledge of Allegiance and the Four Way Test. VP Bradley called out for any birthday’s or anniversaries and there were none this week.

Guest Speaker David Matt Runyon is first assistant at the 24th Circuit Commonwealth’s Attorney’s office. He lives in Paintsville and is the son of Paintsville Mayor Bill Mike Runyon, the legendary basketball coach of the Tigers.

Matt Runyon, 33, is currently running for 24th Circuit Judge in the Lawrence, Martin, Johnson District to replace John D. Preston who is retiring.

Runyon described the duties of his office and fielded questions.

“When the criminal justice system is working properly,  the public shouldn’t even know we exist,” Runyon told the group. “Since January there have been 104 felony criminal cases prosecuted and there are still three more months so we expect 125 cases by the end of the year and 85 to 90% of the cases are drug related including simple possession and theft crimes, only a few are violent crimes.”

“The three things we have to concentrate on is drugs, theft, and violent crimes,” Runyon said.

He said most of the drugs are coming in via I-64 and the Sinaloa Cartel from Mexico has moved into the region, especially Huntington where fentanyl, heroin and other drugs are being shipped in via the “pipeline” and West Virginia is not in our jurisdiction and there is very little cooperation there,” Runyon said.

Runyon said in Kentucky there is no bail bondsman system and judges do not decide on offenders’ release. He described the bail system and other parts of his responsibilities, including educating younger kids especially about the danger of drugs, and hitting the cartel and those high up in the system in the pocketbook.” 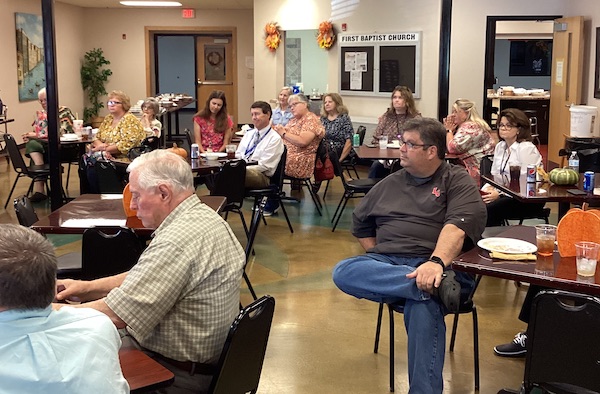 Questions included one from The Lazer concerning the effectiveness of addiction recovery efforts like ARC and OVP.

Runyon said he really enjoys seeing people get a second chance and it really helps the community.

“They are definitely an asset to the communities they serve,” Runyon said.

Robbie Fletcher said he is also all about second chances, but he is concerned with out of area patients who are released and have no place go. “The problem is getting them back to where they came from,” he said.

Then Rotarian Chuck Price said he had run into the problem and he contacted ARC and was given a phone number to call to have former patients picked up and it was “resolved quickly”.

Runyon said to look at and follow the court cases to see how they progress to judge the effectiveness of his office.

Treasurer Ginger Copley reminded Rotarians of the TV ticket sales which are $1 each or six for $5.

The next Rotary meeting is September 29 from 12 – 1 pm at Louisa First Baptist Church dining activities room.