#2 Kaden Gillispie, #44 Will McDavid, #8 Dylan Ferguson #30 Gabe Barker and the rest of the Bulldog defense held a potent Raider run game in check. 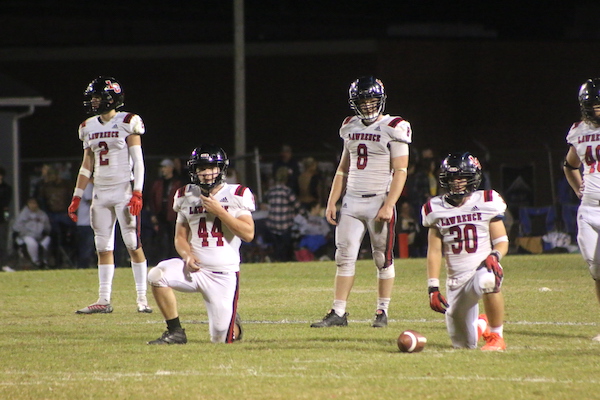 Ferguson found pay dirt on the Dawgs opening possession with a bruising 34 yard touchdown run and Logan Southers added the PAT for a 7-0 lead.

On the ensuing kickoff Gabe Roberts took a short kickoff 65 yards to the house and Ryan Carter made it 7-7 with his PAT kick.

The Bulldogs answered right back with a nice drive that was capped off by Ferguson this time from 5 yards out and Southers tacked on the PAT for a 14-7 lead with 2:59 left in the first quarter.

The Raiders evened the score at 14 on a Issac Boggs 3 yard touchdown run and a Carter PAT to start the second quarter.

Lawrence Co. scored the next 21 points to take a 35-14 lead into halftime. 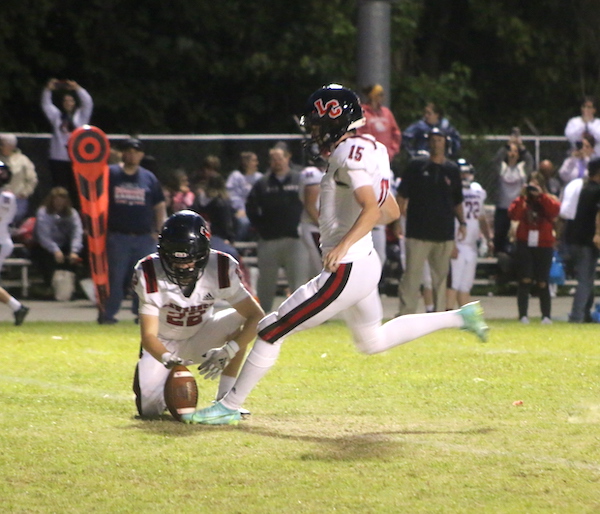 In the third quarter the only scoring was a Eli Estep 8 yard touchdown strike to Mikey Hall but the PAT failed and it was 35-20 Lawrence Co. with :26 left in the period.

Ferguson scored his fourth rushing touchdown of the game this time from 2 yards out and Southers made it 42-20 with 8:51 left in the game.

Head Coach Alan Short talks to his team after a big victory at East Carter. 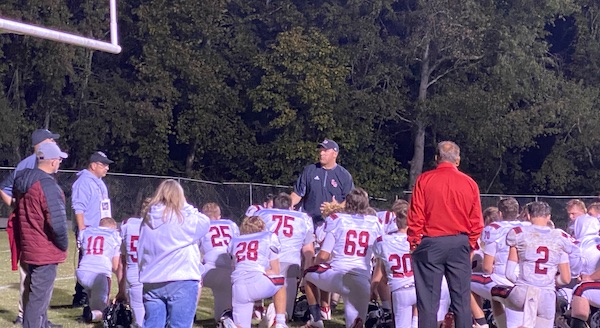 The Dawgs will travel to Cannonsburg to face Boyd Co. ( 4-2 ) Friday night.

East Carter ( 5-1 ) will be off this Friday before traveling to Ashland ( 2-4 ) October 7th to open up District play.

“… We are certainly pleased with our effort on both sides of the ball against East Carter, but we do have some things to work on Special teams that we need to clean up. East Carter is a quality football team, Coach Champlin does a great job with this program as you can see. Thankful tonight and feel like it was a blessing.”

“… Our defense played really well tonight and I couldn’t be more proud of the effort that they gave. They held a great running team in check all game long. Issac Boggs leads the area in rushing and is a really good football player and we were able to limit his production and that is a testament to our defensive staff and players.”

“… Offensively you couldn’t have asked for much more after that first half performance. We were able to run, block and throw. We are a work in progress and we are going to continue to get better and excited about the future.”

“… This was a great atmosphere for high school football, this is what it is supposed to be like and I think we were the most excited team to be playing tonight. I thought they rose to the occasion. I thought our crowd was fantastic and the support that was shown to this team is very special and something we don’t take for granted.” 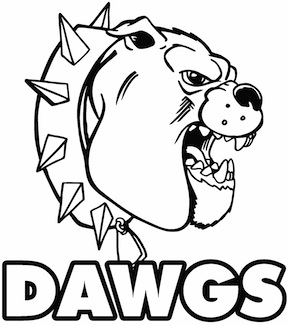