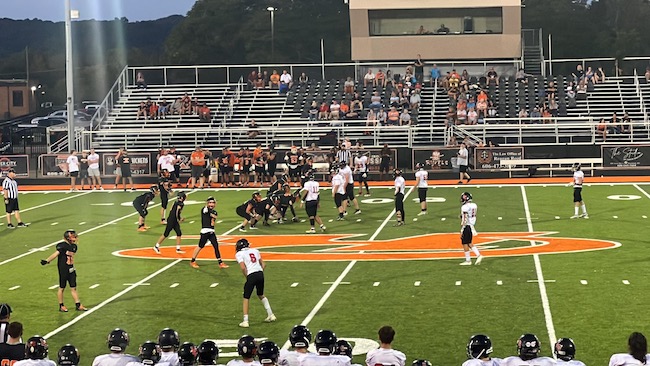 September 20, 2022, Raceland, KY- The Lawrence County Middle School Football team traveled to unbeaten Raceland to face the Rams on Tuesday.  In a game that was delayed more than 30 minutes due to an injured Rams player, the Bulldogs again showed they are one of the best middle school teams in the region.

The Bulldogs were led offensively by Caven Williams who rushed for 122 yards and one touchdown. Kaden Johnson, Mitchell Frazier, and Carlo Chicko combined for another 50 yards on the ground.

Frazier went 3/4 and had one 2-point conversion pass to Andrew Ratcliffe.  Carlo Chicko had a critical 30-yard reception on 4th down. Caven Williams also had a reception.

“…Regarding the game: they have a great team, program, and coaching staff. To hold a team like Raceland, who was scoring at will against other teams, to 8 points is a testament to our defense. Offensively, we took what the defense gave us, but were limited by a lot of false starts and injuries in the second half.  Three of our best players (Johnson, Chicko, and Frazier) basically limped across the finish line.  To fight through that and finish that game on top made me proud.

“…I hear quite a bit about other players in our area being great middle school players. It’s time that people start recognizing that this team has great players. We have a tough and physical group of kids that could care less about their stats. They just want to win.

Ethan Preece is the best offensive tackle in the state and plays defense at a level that a senior in high school plays.

Carlo Chicko is an FBU Top Gun wide receiver that no one can block on defense. I could probably just throw it up to him every time.

Caven Williams runs like a full-grown man out there and leads our team in rushing, he can catch the ball out of the backfield, makes plays all over the field defensively, but when he lead blocks…. It’s a thing of beauty!

Kaden Johnson can beat you on the ground, catching balls, returning punts, and he leads our team in interceptions.  His athletic ability is off the charts.

Ty Brooks can “moss” any middle school kid on earth and then dominates at defensive tackle.  If you don’t double or triple team him, he is going to be in the backfield all night.

Cam Vanhoose is one of the best centers and nose guards (if not the best) in the state.

Andrew Ratcliffe is as fast as greased lightning, competed at FBU Top Gun and is our special team’s superstar.

Cam Castle is brand new to football and leads our team in tackles.

Hayden Blagg is also new to football, learning the game, but is a physical specimen and an athletic stud.

Our younger players like Chandler Preece, Hayden Thomas, Colton McDowell, Gray Derifield and Mitchell Frazier out there performing at a high level against the best teams in the state is a testament to their talent and the work they put in during the off-season. I am very proud of our coaching staff as well.  Our administration is 100% supportive. We also have the best group of parents a coach could ask for.”