According to the arrest report, Social Services had been investigating a report that  Lavanna Tackett, 28, of Paintsville, KY., had been allegedly using drugs in her home with the infant present. After a blood test revealed the presence of meth in the ONE MONTH OLD infant’s system; Johnson County deputies were called by Social Services to the home of  Lavanna Tackett to investigate the case further.

During a search of the home, deputies discovered small amounts of meth, heroin and marijuana, along with drug paraphernalia.

Lavanna Tackett was arrested and was charged with seven (7) criminal offenses, which were as the following:

Lavanna Tackett currently still remains lodged in the Big Sandy Regional Detention Center, where she is being held on a $500 full cash bond. If Lavanna Tackett posts her bond, she has been ordered by a judge to be taken into a drug rehabilitation center. 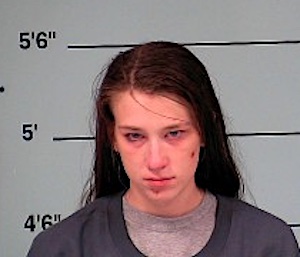 A Harrison County, Kentucky woman is in deep legal trouble after emergency personnel and police responded to a residence where a toddler was found unresponsive and later declared deceased at a hospital.  The child’s mother was found in possession of narcotics in the vicinity.

According to the press release statement by the Kentucky State Police Post 6, in Dry Ridge, in Grant County, KY.,  they were contacted by Harrison County Dispatch for assistance, involving the Harrison County Ambulance had been dispatched to 166 Horseshoe Drive at 12:05 A.M. in reference to an unresponsive 14 month old child.

KSP Detective Josh Wise from Post 6 was called to the scene to conduct a death investigation. Through his investigation at the residence narcotics were located.

As a result of this, detective Wise arrested Bailee M. Thornsbury 22, of Cynthiana, KY., who was the mother of the child, and she has been charged with five (5) criminal offenses, which were the following:

Bailee Thornsbury was transported to and lodged at Bourbon County Detention Center in Paris, KY. She is being held on $50,000 full cash bond for each of her five charges. Additional charges could be pending the state coroner’s report.

Leave a Reply to Kendall Self Cancel reply