SUSPECT TELLS POLICE HE WILL CLAIM ‘TEMPORARY INSANITY’ …SAYING HIS GIRLFRIEND STARTED FIGHT BY AWAKENING HIM, AND THROWING ASHTRAY AT HIM 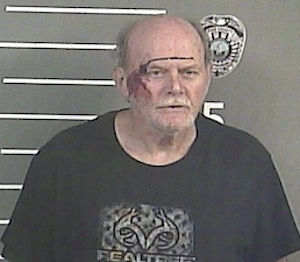 MR. DOMESTIC STABBER: JIMMY ROBERTS. 64, OF PIKEVILLE, KY., WAS ARRESTED FOR STABBING HIS GIRLFRIEND AFTER HE CLAIMED HE WAS ATTACKED FIRST.

A Pikeville man is facing the state’s highest felony assault charge after, according to the Pikeville Police Department, that he had stabbed his girlfriend during a domestic incident.

According to an arrest citation report by Pikeville Police Department patrolman officer Tommy Fouts, just before 2:15 A.M., on Sunday morning, September 18, officers received a call from emergency dispatch of a situation incident from Fourth Street in Pikeville, reporting that a woman had been stabbed.

The unidentified female victim told the officers that the person she identified as the perpetrator, Jimmy Roberts, 64, of Pikeville, who she said that she lived with, had stabbed her.

Upon their arrival at the scene, the citation said, officers found the victim outside the residence with what appeared to be stab wounds to her back, her right shoulder just beside her neck and on her leg.

Officer Fouts wrote that EMS personnel were called to assist the victim, who told officers that the man with whom she was living with, Jimmy Roberts, was in the apartment and was the person who had stabbed her.

The arrest citation stated officers located Jimmy Roberts inside the apartment, and that he was taken into custody after officers used a Taser to subdue him. Officer Fouts wrote in the citation that there was a large amount of blood throughout the residence.

Jimmy Roberts, according to the arrest citation, willingly spoke with officers without being questioned. and whereupon he told the officers that the incident had begun at approximately 1:30 A.M., when while he was asleep, he was woken up by his girlfriend throwing an ashtray at him and being struck in the head.

The arrest citation further said that Jimmy Roberts also told the officers while he was being handcuffed, that he was “going to use temporary insanity because she made him do it.”

Jimmy Roberts was transported to and lodged in the Pike County Detention Center on the charge of * ASSAULT, 1ST DEGREE; and was set to be arraigned in Pike County District 2 Court on Monday morning, September 19, at 10:00 A.M., with Judge Tommy Ryan May.

Jimmy Roberts is currently being held on a $25,000 full cash bond only.