Dawgs have won two in a row after the dismantling of Magoffin Co. in the District opener. 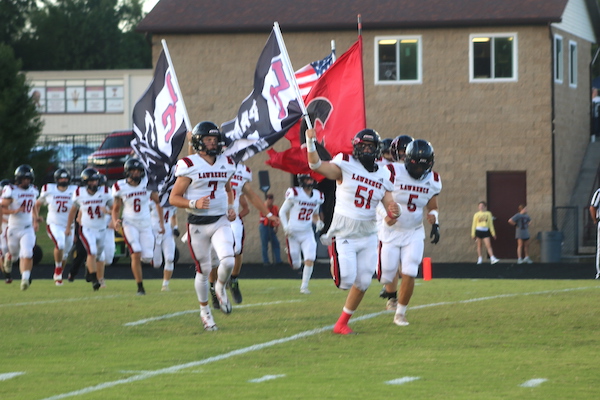 On the opening possession for Magoffin Co. the Dawgs forced a fumble and Dylan Ferguson returned it for a touchdown, Logan Southers added the PAT and it was 7-0 LC with 9:02 left in the first period.

Aden Barnett put the Hornets on the board with a touchdown run and then hit Ian McCarty for the two point conversion and MC led 8-7 with 4:02 left in the first quarter.

Dylan Ferguson put Lawrence Co. back in front with a 11 yard touchdown run and also added the two point conversion and it was the Dawgs 15-8 with 1:43 left in the first quarter.

In the second quarter the Bulldogs added to the lead on a Cody Crum 15 yard touchdown run and Southers added the PAT with 10:46 left in the first half.

Lawson Baisden picked off his third pass of the year and went 60 yards to the house and Ferguson added the two point conversion and it was 30-14 LC with 5:26 left.

On the Hornets first play after the timeout Kaden Gillispie scooped up a fumble and returned it for a touchdown and Southers made it 37-14 with 5:06 left in the first half.

Magoffin Co. made it 44-20 when Barnett hit Grayson Whitaker with a 7 yard strike with 5:10 left in the third quarter.

The Dawgs answered right back when Baisden scored on a 39 yard touchdown jaunt and Southers made it 51-20 with 4:23 left in the third quarter.

Dylan Whitt and Ryan Marcum before the game. 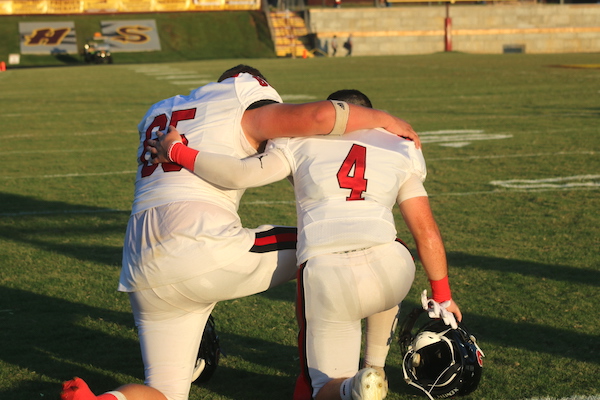 Ryan Marcum for in on the action when he scored from 14 yards out and Southers made his sixth PAT in six attempts and it was 58-20 Lawrence Co. with 9:50 left in the game.

The Dawgs return to action when they travel to Grayson to battle East Carter who is undefeated at 5-0 on the year.

The Hornets will host Belfry ( 2-3 ) in another District matchup.

“…Very pleased to be 1-0 in the district. Very hard fought game. This was a completely different Magoffin County team than recent years. Coach Derossett has changed the culture of their program.”

“… Pleased that our defense was able to score three touchdowns. I have been coaching almost 20 years, and have never been a part of a game like that.”

“… Offensively we were able to average almost 10 yards per play. We will take that every week. Our offensive line played well and our backs ran hard.”

“… Looking forward to competing with East Carter this week. Huge challenge for us and a chance to see where we are.”

GARY WAYNE COX: You never know what to expect at an airport