Royal beekeepers tell their hives about the Queen’s death, following a centuries-old tradition that echoes in Appalachia

When Queen Elizabeth II died last week, most of the world heard the news within hours.

Her bees didn’t hear about it until the next day. That’s when royal beekeeper John Chapple went to Buckingham Palace and Clarence House, where the Queen’s hives are kept, to inform the bees that their mistress had died. He also asked the bees to be good for their new master, King Charles III, John Dingwall reports for the Daily Mail.

“Telling the bees” is an ancient tradition, stemming from ancient cultures that revered bees as messengers to the spirit realm. If bees are not told about important family news (such as births, deaths, and marriage), legend holds, bees could stop producing honey, desert their hives, or even die.

The practice is best known in the British Isles, but hitched a ride to Appalachia along with the Scots-Irish and English Borderers who settled the mountains. The latest book of the Outlander novels, about a Scot and his time-traveling wife who eventually settle in the Blue Ridge Mountains, is Go Tell the Bees That I Have Gone. 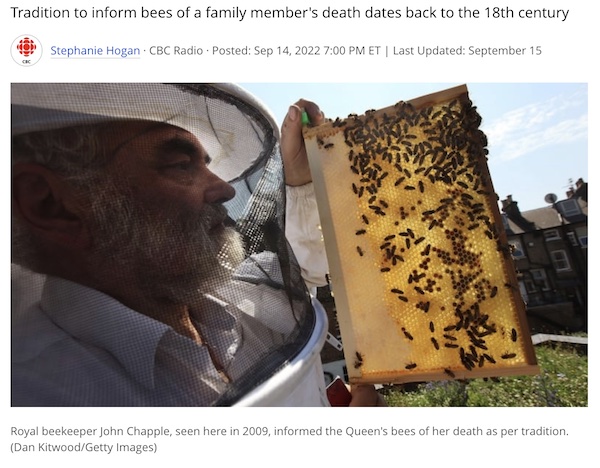 Many modern beekeepers still keep the age-old custom—not because they worry about bad luck, but as “a mark of respect,” folklorist Mark Norman told Daniel Victor of The New York Times.

Stephen Fleming, who co-edits BeeCraft magazine, said he performed the tradition after a fellow beekeeper died. “It was just something I thought my friend would have enjoyed,” he told Victor. Which is just, well—sweet.