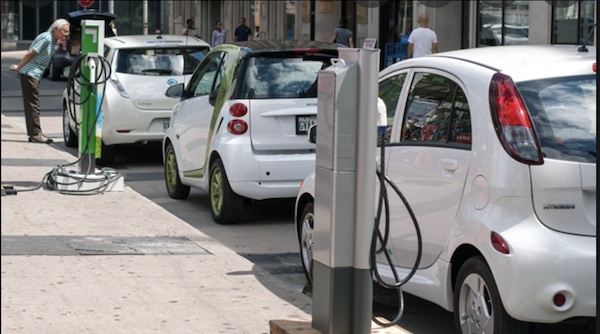 “Kentucky was already a leader in automotive production and the EV battery production capital of the United States, which is helping us create thousands of high-quality jobs for Kentuckians,” Gov. Beshear said. “Today, we are further cementing the state’s status as a leader in the EV revolution by beginning to build the charging station infrastructure that will enable EV travel in every corner of our commonwealth.”

Kentucky’s Electric Vehicle Infrastructure Deployment Plan outlines Kentucky’s high-priority EV corridors and was developed by the Kentucky Transportation Cabinet (KYTC) in cooperation with the Energy and Environment Cabinet (EEC), Public Service Commission and Federal Highway Administration, along with input from hundreds of other agencies, organizations and interested parties.

The plan was submitted to the U.S. Joint Office of Energy and Transportation in late July and has now been approved, securing federal National Electric Vehicle Infrastructure (NEVI) formula program funds. Federal funding for the first two years of the program will be provided to KYTC over the next few months. With matching funds, a total of $86.9 million will be available for EV charging infrastructure over the next five years.

Initial NEVI funding must be spent to build out direct current fast-charging (DCFS) stations that can fully charge a battery in 30 minutes or less at interchanges along interstates and parkways. Kentucky already has identified other priority highways on which charger access will be expanded in future phases to fill connectivity gaps.

“Our goal is to have a statewide network of EV chargers by 2025,” said KYTC Secretary Jim Gray. “Approval of our EV plan by the federal government now ensures Kentucky will receive $25 million in federal funds this year to begin to design and build that network, starting with our interstates and parkways.”

Kentucky is the EV Battery Production Capital of the United States
Kentucky already was the nation’s No. 1 per capital producer of cars, light trucks and SUVs, with iconic brands and models like Corvette, Toyota Camry and Ford F-150. Further strengthening Kentucky’s position, two giants of the EV battery industry – Ford Motor Co. and SK Innovation and Envision AESC – recently selected Kentucky for the construction of two battery manufacturing plants along Interstate Highway 65 at Glendale and in Bowling Green. These projects represent nearly $8 billion in investment and will create 7,000 high-quality jobs.

These EV-related projects total over $9.2 billion in new investment with more than 8,500 full-time jobs announced since Gov. Beshear took office.

“The progress being made in EV transportation and manufacturing will be transformative,” EEC Secretary Rebecca Goodman said. “It fits perfectly with the commonwealth’s energy strategy that strives to create a diverse and resilient energy infrastructure and encourages sustainable economic development amid a changing climate.”

Alternative Fuel Corridors Approved
In July, the Federal Highway Administration approved Kentucky’s plan for Alternative Fuel Corridors (AFCs). As part of that plan, all of Kentucky’s 11 interstates and eight parkways are now designated as EV AFCs (blue routes on EV corridor map). Federal guidance requires NEVI formula program funds to first be spent on building out Kentucky’s long-distance EV AFC charging network. Fast-charging stations must be located no more than 50 miles apart along the AFC, not more than one mile off the AFC, must each have four ports at 150-kilowatt per port per station (600-kilowatt total), and must not be proprietary (stations limited to specific vehicles). Several factors were considered when identifying corridors, including distance to existing charging stations, equity and access in rural communities. Specific charging locations will be determined later.

Next Steps
On Aug. 24, KYTC issued a Request for Information (RFI) from the private sector related to the deployment of DCFC stations on the EV AFC corridors. The RFI is a precursor to developing a request for proposals for the deployment of DCFC stations on the EV AFCs. Local communities and other agencies can apply for competitive grants to fund electric vehicle charging stations later in 2022 or early 2023 after the U.S. Department of Transportation has issued further guidance and a notice of funding opportunity.