I can vividly remember Sept. 11, over 21 years ago as a first-year law student who had just started at the University of Kentucky. I was in between classes and walked downstairs to the student lounge, where I saw a large group of students gathered around the television looking at footage of an “accident” where a plane hit one of the World Trade Center towers.

While we were watching the tragedy unfold, another passenger plane hit the second tower. At that moment, we all became aware that the initial crash and what was to follow was no accident. A short time later, the Pentagon was hit, and a fourth plane crashed into a Pennsylvania field after the passengers revolted. At that moment, the world changed forever.

This past Sunday, America stood in remembrance of the lives lost on Sept. 11, 2001, in the terrorist attack on the World Trade Center in New York City, the Pentagon, and those who sacrificed themselves to save others by fighting back and who perished in that open field in Pennsylvania.

To honor the 2,977 souls who lost their lives on Sept. 11, 2001, the Senate stood in unison during the 2021 legislative session to commemorate the 20th anniversary and urged all Kentuckians to remember not the pain and loss that occurred on that awful day, but the American courage to rise above and overcome in our darkest hour. I ask you to join my colleagues and me as we reflect on the eloquent words of our collective resolution, and never forget. 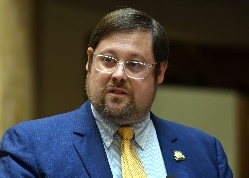 Never forget American Airlines Flight 11, which crashed into the North Tower of the World Trade Center, beginning a series of terrorist attacks that would prove to be the deadliest in human history.

Never forget United Flight 175, which crashed into the South Tower of the World Trade Center.

Never forget American Airlines Flight 77, which crashed into the Pentagon, created a path of destruction and placed the remainder of Washington, D.C. on high alert.

Never forget the field in Stonycreek Township near Shanksville, Pennsylvania, where United Airlines Flight 93 crashed, killing 33 passengers and seven crew members, with those aboard courageously overtaking the hijackers and saving even more innocent lives.

Never forget the trauma—emotional and environmental—which still lingers 21 years later, even as the buildings that were damaged or destroyed have been rebuilt.

Never forget the American spirit that in our hour of greatest need, when hope seems the most unattainable, we come together to build a better future.

Yet as we remember those precious Americans who lost their lives on that tragic day and pray for the comfort of those still mourning their lost loved ones, we must also not forget that radical Islamic terrorism is still a real and present danger in the modern world. As a nation, we must remain vigilant, protect our nation’s borders and ensure that such a brazen, cowardly attack on our great country can never happen again.

Most importantly, we must continue to support and honor our brave troops in the United States military as they protect our Homeland and as they take the fight to the enemy on foreign shores.

America has always been a nation that shows strength, unity and courage in the face of adversity. So, as we remember Sept. 11, let us rekindle those patriotic feelings of old and strive to recover the greatness of a nation that has for the past 246 years stood as a beacon for democracy in freedom in the world.

Senator Phillip Wheeler, R-Pikeville, represents Kentucky’s 31st Senate District, including Elliott, Johnson, Lawrence, Martin, and Pike Counties. Wheeler is vice-chair of the Senate Standing Committee on Economic Development, Tourism, and Labor. He also serves as a member of the Senate Standing Committees on Transportation, Natural Resources and Energy, Judiciary, and State and Local Government. Additionally, he is a member of the Capital Planning Advisory Board. Lastly,  Wheeler was recently appointed to the Benefits Cliff Task Force during the 2022 Interim.