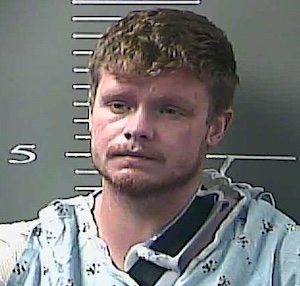 PAINTSVILLE TRIPLE MURDER SUSPECT: RONNIE R. PACK, 21, OF PAINTSVILLE, KY., WEARING A MEDICAL GOWN FOR HIS MUGSHOT ON MONDAY, SEPTEMBER 12, SHORTLY AFTER HE WAS RELEASED FROM A LOCAL HOSPITAL, WHERE HE WAS BEING TREATED FOR INJURIES AFTER BEING SHOT BY A STATE TROOPER IN THE GREENTOWN AREA NEAR PAINSTVILLE, SHORTLY AFTER THE TRIPLE HOMICIDE HE COMMITTED IN PAINTSVILLE

The Kentucky State Police Post 9, in Pikeville, KY., have released the names of the three deceased victims and the suspect in a deadly shooting that left three dead Friday, September 9, on Depot Street in Paintsville.

The shooting happened around 10:40 A.M., and that the alleged murder suspect was arrested less than an hour and a half afterward several miles away.

State Police identified the suspect Ronnie R. Pack, 21, of Paintsville, KY., who was arrested and charged with three counts of murder and one count of first-degree wanton endangerment.

Troopers say Ronnie Pack was shot after he was involved in an officer-involved shooting on Route 581, in the Greentown area of Johnson County, at around 12:00 P.M., on Friday, after he allegedly pointed a gun at a state trooper.

Ronnie Pack was transported to a local hospital in stable condition

Ronnie Pack was released from the hospital on Monday afternoon, whereupon he was transported to and is currently being lodged in the Big Sandy Regional Detention Center in Paintsville.