Colby Rock scored on a 2 yard touchdown run and Nathan Totten booted the PAT to give the Red Devils a 7-0 lead with 6:48 to hit in the first quarter.

Kaden Gillispie makes his way to the end zone to put the Dawgs on the board. 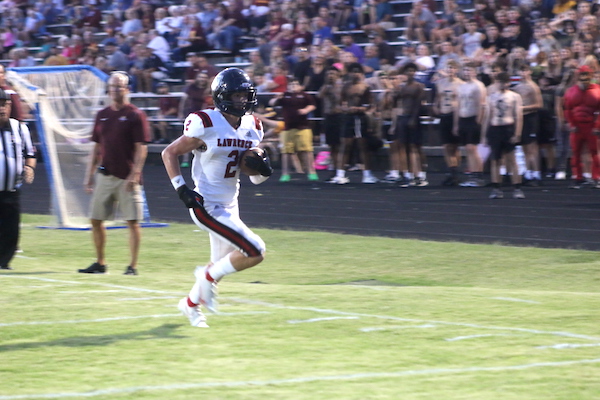 The Dawgs finally got on the board when Talan Pollack found Kaden Gillispie on a nice 27 yard touchdown and Logan Southers tacked on the PAT to tie it up at 7 all with 9:41 left in the first half. 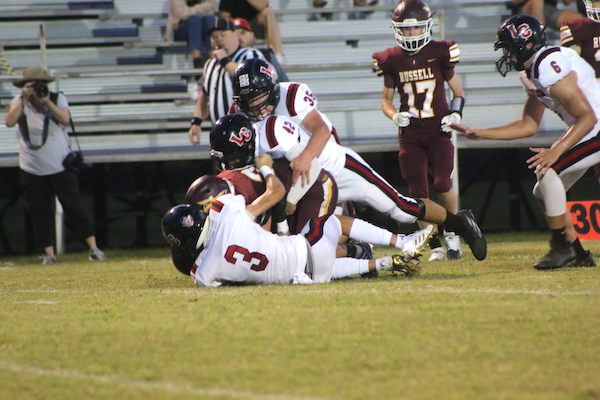 Lawrence Co. took the lead and never relinquished it on Gillispie 15 yard touchdown run and Southers added the PAT for a 14-7 lead with 7:28 left in the first half.

The Dawgs scored with :19 left in the first half on a Pollack 16 yard scamper and Dylan Ferguson added the two point conversion to make it 22-7.

Totten booted a 44 yard field goal for Russell as time expired to set the halftime score at 22-10 Bulldogs.

In the third quarter it was all Lawrence Co. as the Dawgs outscored the Red Devils 28-0.

Gillispie scored on a 15 yard touchdown run and Southers tacked on the PAT to make it 29-10 with 9:21 left in the third.

Just over a minute later Gillispie picked off a pass and raced 65 yards to the house and a Southers extra point made it 36-10 with 8:15 left in the third.

Cody Crum races toward the end zone against Russell. 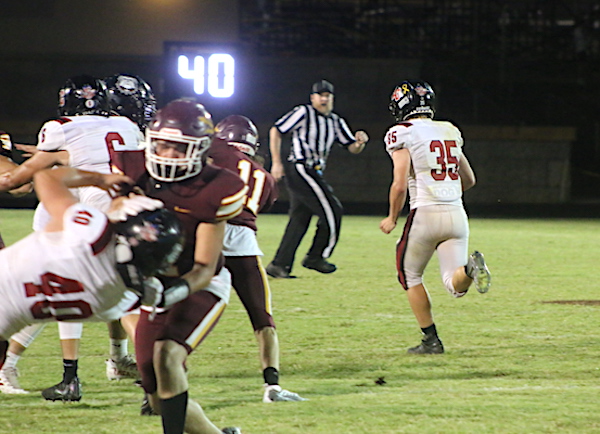 Cody Crum added the exclamation point with a 62 yard touchdown run and Southers made it 50-10 with the extra point kick to set the final score with 3:04 left in the third.

The Dawgs will open up District play with a road game at Magoffin Co. ( 2-2 ) on Friday.

“… We’ve been waiting for Kaden Gillispie to have a breakout game, I knew it was going to come at some point, I sure didn’t know it would be quite this good. I’m very happy for him, He’s been nothing but a true team player. I’m very excited to play the rest of the season with him on our team. He’s the total package he can do anything, He even punted for us there. He’s a special kid and special football player.”

“… That one feels better, for sure, where it’s on defense I mean, they only had 10 points on the board. If we can score on defense and hold people to that amount of points, that’s better than offense any day.”

“… We came out with a lot more energy than the week before. We were the most excited team to play after coming off a tough loss at home. We really needed a good game to get our momentum back for these upcoming away games, so I’m glad we could go out and do that.”

“… Just have to treat every game the same. We will go through practice this week prepping for them and that will get us ready for Friday night. After the Greenup County loss everyone has had a different level of focus and nobody wants to lose again. Everyone is locked in and ready to compete in practice and the game.”