Host Perry Co. Central with trip to Owensboro on the line Thursday 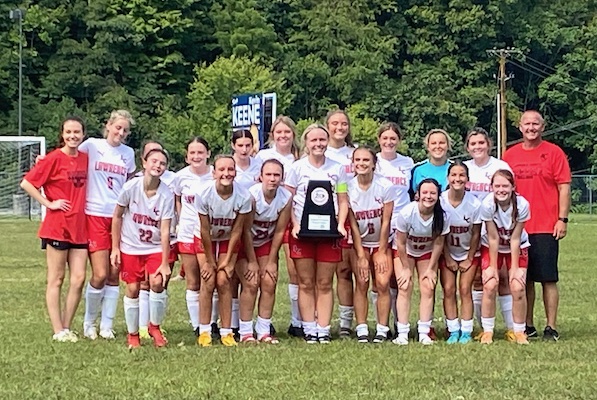 The SoccerDawgs improved to 5-3 and will host Perry Co. Central ( 6-4-1 ) Thursday at 6:30 in the Semi-State. Winner will advance to the Final Four in Owensboro.

Maggie Johnson scored twice, Leandra Curnutte and Camber Maxie-Stepp scored one goal each against the Pirates.

“… Our last few times we have played Belfry has become more of a rival game than ever before. We have had our hands full with them and Saturdays matchup was no different. Our girls had homecoming activities all week to go along with games at Paintsville and Martin Co. We knew they’d be tired and a 10am game at Belfry didn’t help matters. This game was not only lit advance in the 2A but will count as our district seeding. We let the girls know the importance of the win and they came out and executed.”

“… We had 2 goals from Maggie Johnson in the first half and in the second Leandra Curnutte and Camber Stepp added goals of their own to put us up 4-0. Belfry would get a goal late buyout defense was just too much for them.”

“…/ I can’t say enough of how well Laylen Hopson, Reagan Webb, Katie Compton and Abby Nelson have been playing. Our goalkeeper Abby Maynard has also played a huge role in our success the first half of the season.”

“… We will host Perry Co in the semi-state game on Thursday at 6:30pm for a chance to move on to Owensboro in the State semifinals.”