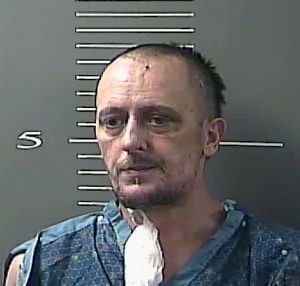 CHARGED WITH THE FIRST-DEGREE MURDER OF HIS OWN 12 YEAR OLD DAUGHTER: STACY A. COLLINS, 47, OF VAN LEAR, KY.

Johnson County deputies went to a hospital in Lexington, KY., on Tuesday morning, August 30, with an arrest warrant to be served for Stacy A. Collins, 47, of Van Lear, KY., who has been charged with murder in connection with the death of Stacia Collins.

“He was picked up in Lexington at a medical facility and transported back to the Big Sandy Regional Detention Center,” Sheriff Saylor stated.

The tragic murder investigation started on August 11, when deputies responded to a report of an assault in the Van Lear community. Stacy Collins was found with what turned out to be a self-inflicted gunshot wound.

During the investigation, deputies found his 12-year-old daughter Stacia Collins who was missing and had not been at school that day or the prior day.

That road was about two miles away from where Stacy Collins was found, and Saylor said the body was later identified as Stacia Collins, and that she had died from a gunshot wound.

The lead investigator of the Collins murder case, Deputy Tim Clark, claimed there may be additional charges in the weeks to come.

“There’s a whole lot more that needs to be done on this,” said Deputy Clark, “There’s another charge that we’ll probably be coming forth with soon; [we want] the harshest that we can get.”

Both Sheriff Saylor and Deputy Clark, says the community continues to grieve the loss of the 12-year-old girl.

”We have been in contact with several members of the school where Stacia attended, and they are really struggling with the facts of this case, what they know, the outcome of it,” Sheriff Saylor stated. “It’s very challenging. It’s heartbreaking. There’s no understandable reason for this.”

Stacia Collins’ mother, who is Stacy Collins’ estranged wife, reported to investigators she had some online messaging exchanges with Stacy Collins the day before her daughter’s death, which took an unexpected turn, when she began receiving chilling text messages from Stacy Collins just before the shootings, saying everyone in the town was against him and asking her if she wanted to talk to her daughter “one last time”.

Stacia’s mother said that her estranged husband stopped responding to her after that message, and she never heard from him or her daughter again.

Sheriff Saylor said there is no known motive for the girl’s death, but he emphasized the investigation remains underway.

Deputy Clark added that the death penalty was not off the table and what happened to the young girl was “inexcusable, unacceptable, and with absolutely no justification.”

There is currently at this time no date set for Stacy Collins’ first preliminary hearing in court.