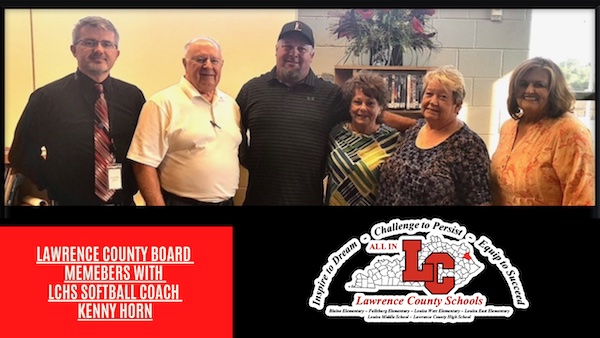 A special meeting of the Lawrence County Board of Education was held in the LCHS library on August 22, 2022, at 6:00 PM.  Board members Jim See, Garnett Skaggs, Maddlene Roberts, and Barbara Robinson were present in-person, while Chairman Heath Preston joined virtually.

The excitement of the meeting was granted as the board members considered bids for construction of the “LCHS Softball Fieldhouse & Upgrades” project.  After deliberation on the bids from construction companies, the board approved the construction through CPR Construction located in Grayson, KY.  CPR Construction turned a considerably lower bid in total of $854,108.00.  The breakdown of this bid was $782,000.00 for the building shell.

There were five separate packages added to building bid.

LCHS Softball Coach Kenny Horn was present at the board meeting.

Before the board members voted on the motion, he expressed the need to have a separate facility for the female athletes.  He stated it would also help to alleviate such late practice times.

The board members voted to approved the motion to award the bid to CPR Construction and proceed with construction of the fieldhouse project on motion of Jim See and second by Madelynn Roberts.

Coach Horn gave a deep, appreciated thanks for understanding this need and placing the construction of the facility as a priority.

All residents are always invited to attend the Lawrence County Board Meetings to become aware of the issues affecting our students and schools.

[Editor’s note: After watching the meeting virtually, which consists of Chairman Preston’s face only, we added the board members who made motions to this story from the BOE}