10. Approve Tourism Budget – Tabled, Motion by Rick Blackburn 2nd by Mouse Halcomb.  Discussion from LC Tourism Chairman Wes Kingsmore and LC Clerk Chris Jobe about Budget for LC Tourism getting completed by Monday August 22, 2022. The tourism budget must me balanced before county is eligible for a $43,000 grant. Tourism Treasurer Brenda Hardwick said at this week’s Tourism Commission meeting that the commission is actually in the black by at least $15,000, but the expenditures and deposits have not been reconciled in the books so members are currently in the process of doing that and the grant should be good.

12. Approve Donation for Bicentennial Septemberfest – Discussion from Deputy Judge Vince Doty who said “The County usually donates $2,000-$3,000 for Septemberfest, this year Septemberfest has some Big Headliners and is requesting $5,000 donation from Lawrence County Fiscal Court. Motion by John Scaggs, 2nd by Rick Blackburn. None opposed.

13. Approve Payment Agreement on Guardianship Evaluations –   Deputy Judge Vince Doty and LC Attorney Brad Derifield discussed some of the payments are from 2019. The total was $12,400 payable to Pathways. Motion by David Pinson 2nd by Rick Blackburn. 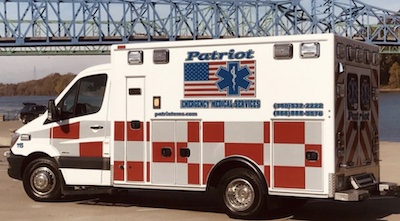 14. Public Comments – Judge Phil Carter said, “Patriot has taken over HealthNet Ambulance Service.” He did not give a reason for the switch or if the county has to approve the new service which is out of Ironton, Ohio.  Lazer staff reached out to Patriot EMS for comment, no comment has been received at time of published story. We found this on the Patriot FB page:

“…Patriot EMS makes it part of our business to participate in the improvement of the quality of life here in Lawrence County, Ohio. We participate in, and help fund, local events in our community such as the annual Lawrence County Science Fair, plus numerous sports teams and event coverage. Patriot EMS also supports the local community group, The Friends of Ironton. We like for the citizens of the communities we serve to know about us and how we handle our business. The more they know about Patriot EMS before they, or a loved one, needs us, the more comfortable they feel in our care. Being a veteran owned company we take great pride in opportunities to participate in activities such as the Memorial Day Parade in Ironton. We are able to personally thank veterans for their service and sacrifice for our country.

The vision, mission and values of Patriot EMS are not simply words; they are a direction we strive for in all our activities.”

Lawrence Co. Schools chief Rob Fletcher was in attendance to announce that the BOE has used the “compensating rate” for taxes which means no raise this year. He also said earlier this week that the schools are making progress with all the high school home activities now on internet, for a fee of $175 you can watch all the home games in all sports commentated by local radio personality Wendall Feltner. (The Lazer has asked for access to the channel as taxpayers but received no reply). Fletcher also mentioned the astroturf being added for all the playing fields and other improvements the school system is making…

Tourism chairman Wes Kingsmore addressed the court and reported on progress on the $43,000 state grant. “We’re going to have the budget done by next Monday,” he said. “We are also carrying on our other efforts at the same time.”

We will add a comment from Patriot (when we get one) and explain the CDBG grant later today.

Lawrence County Docket for the week of August 15-19