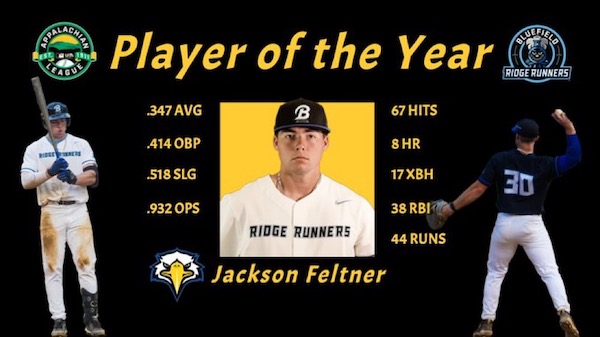 Feltner played for the Bluefield Ridge Runners and hit a robust .347, blasted eight home runs and drove in 38 runs as well.

Feltner made the all-star game and participated in the home run derby as well.

Feltner will be going into his Junior year at Morehead St. next spring and looks to lead the Eagles to a OVC title and a berth in the NCAA tournament.

“… Winning the Player of The Year for the Appy League is a great honor that I’m humbled to receive. I would like to thank both my teammates and coaches for all they did in helping me succeed. None of what I did this summer is possible without them. My summer experiences in Bluefield and Chillicothe have been similar. Both have been great places to spend the summer, along with a great chance to face good competition and improve as a player.”