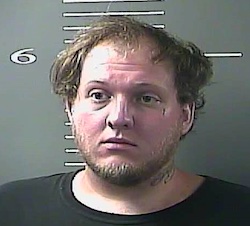 A Johnson County, Kentucky man was arrested in Martin County. KY., on late Sunday afternoon, August 14, after a drug trafficking complaint turned up a substantial quantity of fentanyl, according to a press release statement released by the Martin County Sheriff office .

Martin County deputies were called to a gas station in the Tomahawk area on early Sunday evening. Once they arrived there, they encountered Michael B. Meade, 23, of Hager Hill, KY.

The Martin County Sheriff Office’s recently purchased new police dog, K-9 Zoe was brought in to sniff around Michael Meade’s car, which led deputies to the discovery of more than a grams of fentanyl in his vehicle.

Even though it would seem to most of the citizens that the total amount seized might sound small, Fentanyl is so powerful that a quantity as little as two milligrams can be lethal, and Michael Meade allegedly had more than 500 times that amount.

Michael Meade was arrested and charged with

The bill, which was called HB 215, or Dalton’s Law, was passed by the state legislature in March of this year. Before the bill was drafted, Fentanyl traffickers were only serving 50% of their sentence.

HB 215 saw bipartisan support and Governor Andy Beshear signed it into law on April 8, 2022; and it went into effect in early July 2022.

Michael Meade was transported to and lodged in the Big Sandy Regional Detention Center in Paintsville.