NOAH IS A BLAST AT SCIOTO COUNTY FAIR; GAINING EVEN MORE FANS 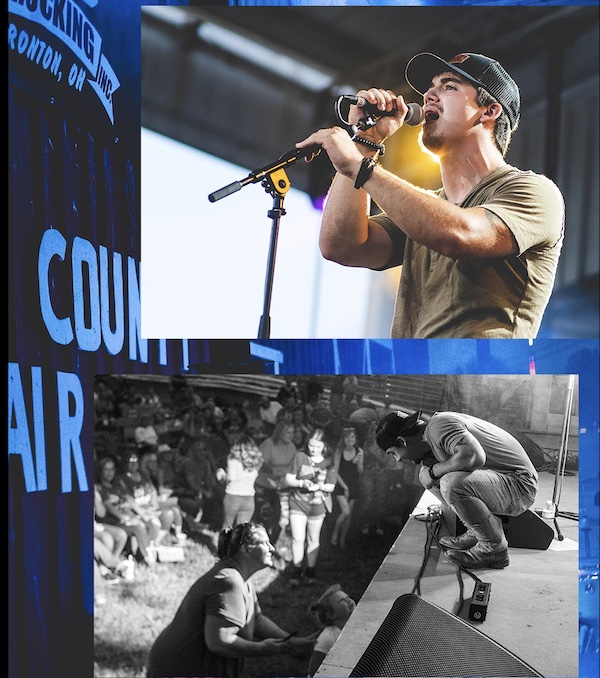 Lawrence County, Ky.’s NOAH THOMPSON played for a huge crowd at the Scioto County Fair last night. Photos from the show have been distributed on Noah’s Facebook page as the crowds get bigger and the girls’ hearts keep fluttering.

Noah has been a hit since he took the stage on ABC’s American Idol show beginning Feb. 27, of this year when he surprised the Watch Party for him at the Garden Theater by showing up himself.

He’s never a stranger when he is home in Lawrence County gladly posing for selfies everywhere he goes. A local car dealership has provided Noah with a bright red pickup which can be seen often in Louisa.

He told The Lazer early in his rise to the top on AI that he loves his hometown and appreciates all their support. Back in April Lazer reporter Susan Salyer got the chance to ask him a few questions and one of them is especially cool.

LAZER – How has American Idol changed you?….

NOAH –  ”I don’t think it’s changed me at all other than I believe in myself as an artist more now than ever. I’m still just Noah Thompson from Lawrence County, Kentucky and my goal is not to let any of this change me. I’m so grateful for this journey I’ve been blessed to be on and I can’t wait to give back to the people back home who’ve helped me.”

Phone calls have come in to Thelevisalazer.com from Lexington, Louisville and Indiana asking about his scheduled appearance at this year’s Septermberfest which promises to pack Louisa to its gills. One caller asked how to get to downtown Louisa and what street it is on.

Told her to follow the signs and then the crowd and you better come early because international superstar Ricky Skaggs, also from Lawrence County, is slated to appear at the festival as well as Lawrence County’s noted singer and songwriter Larry Cordle and bluegrass gospel groups will perform.

The schedule for Friday and Saturday nights (Sept. 16 and 17) lineups haven’t been released but is expected in the next week or so according to Festival chairman Harold Slone.