FEMA CRITICIZED FOR BEING TOO STINGY WITH FLOOD RELIEF

Recent Ky. disaster the deadliest non-tropical flash flood since 1977; FEMA criticized by governor for being too stingy with relief

The flooding in Eastern Kentucky last week was the nation’s deadliest non-tropical flash flood since 1977 (meaning one not tied to a tropical storm or hurricane), Jonathan Erdman reports for The Weather Channel. At least 39 people died and more than 1,300 people had to be rescued.

Most who survived the flood will have a long road to recovery—one likely made longer by limited government assistance and lack of flood insurance. 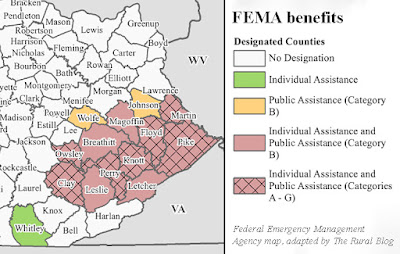 On Thursday Democratic Gov. Andy Beshear criticized the Federal Emergency Management Agency for denying too many requests for assistance from flood survivors.

“FEMA Press Secretary Jeremy Edwards responded Thursday night that agency personnel will be in the flood-stricken region ‘as long as it takes’ to help Kentuckians recover. Edwards said the agency’s leadership is working to ‘reduce barriers and cut red tape’.”

Meanwhile, most survivors will have a hard time rebuilding because only 2.3 percent of the population in the 10-county disaster area had FEMA flood insurance. Many decline to buy the insurance, which costs about $1,000 a year, because they think the premiums are too expensive in relation to the risk of flooding.

“Flood coverage is sold separately from homeowners’ insurance policies and is considered vital to disaster recovery because policyholders can collect up to $250,000 in claims payments,” Thomas Frank reports for Energy & Environment News. “Federal disaster aid, on the other hand, typically pays residents just a few thousand dollars and covers only temporary home repairs.”