Sheriff Jackson and Chief deputy Keefer observed a vehicle passing in a no passing zone on Ky 32 west of Louisa at a high rate of speed. Upon activating their emergency lights, the vehicle accelerated to elude.

The vehicle turned onto a gravel road and the passenger, Larry Joel “Beard’ Maynard, 48, of Louisa jumped out of the vehicle and threw a bag into the weeds as the driver continued.

After a short foot pursuit, Sheriff Jackson and Deputy Wells apprehended Maynard. Maynard had a bag of what appears to be methamphetamine in his sock and the bag he tossed contained a similar substance.

In all, 129 grams of methamphetamine was confiscated. 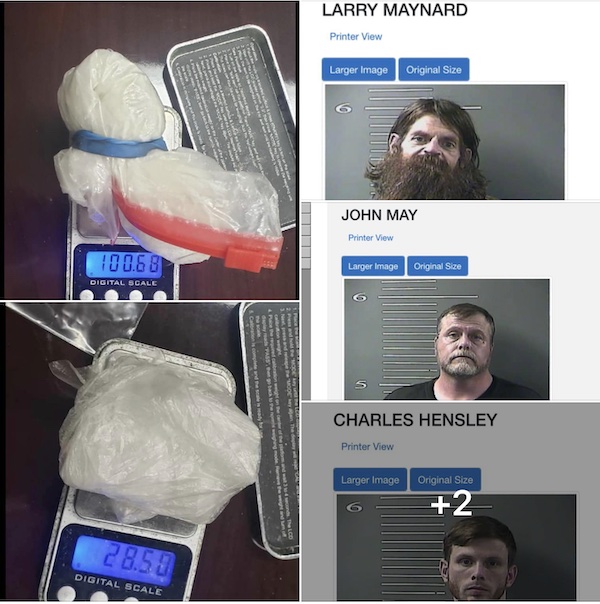 Maynard was charged with Fleeing or evading on foot, trafficking in a controlled substance, and tampering with physical evidence.

The driver, Michael May, continued the chase after Maynard jumped out. Chief deputy Keefer continued after May and discovered the vehicle abandoned near a camper.

There were two individuals at the camper where May fled on foot. Rachael Mills and Charles Hensley, both of Louisa. Mills had an outstanding warrant for failing to appear on drug charges and Hensley had a warrant for flagrant non-support.

The four individuals arrested were transported to the Big Sandy detention Center.

SHERIFF RECOVERS STOLEN GOODS FROM STRING OF BREAK-INS AT BLAINE