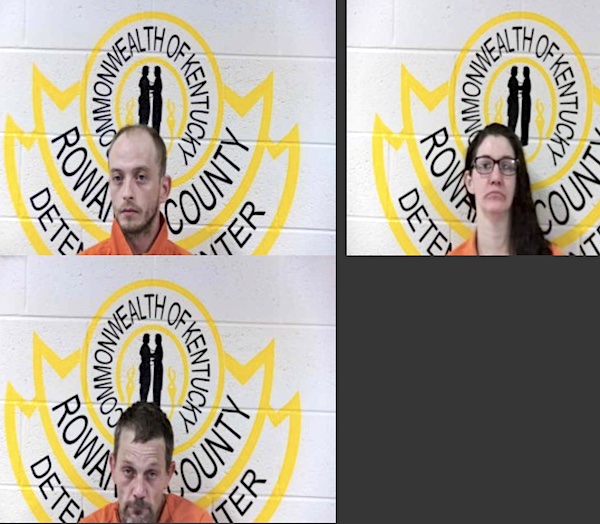 DEADLY TRIO? (PHOTOS FROM LEFT TO RIGHT): MICHAEL S.WALKER, 32, BRITTANY E. REED, 30, & CHRISTOPHER “ROOSTER” TURNER, 42; ALL THREE INDIVIDUALS OF WHOM WERE ARRESTED FOR MURDER, IN CONNECTION TO A DEADLY SHOOTING MID-MONDAY MORNING IN BATH COUNTY

Three suspects, two men and a woman, have been arrested by police in connection with a deadly shooting in Bath County in the predawn hours Monday morning, July 25.

According to the press release statement from the Kentucky State Police, Post 8, in Morehead, KY., they reported they received a call for assistance from Bath County emergency dispatch around 5:57 A.M. in reference to a shooting incident.

The shooting occurred at 1882 Adams Road, in the rural Owingsville area of Bath County.Upon entering the residence, troopers located a male deceased inside. The male was identified by the Bath County Coroner Officer as Earl J. Stephens, 44, of Mount Sterling, KY. Earl Stephens was pronounced deceased by Bath County Coroner Andrew Owens.

KSP troopers say their initial investigation shows that at least three people were at the home when the shots were fired. Through the investigation, KSP detectives gathered information that would assist them in identifying possible suspects involved in the shooting.

A third arrest warrant was obtained by state police, which was issued for Christopher “Rooster” Turner, 42, of Jeffersonville, KY., for Murder, 1st Degree. Christopher Turner was eventually  later located and was arrested by the Bath County Sheriff Office just after midnight on Tuesday morning, July 26.

All three suspects are being held on a $1,000,000 (one million) full cash bond; with Christopher Turner also being added a further $2,500 full cash bond, for a court bench warrant out of Montgomery, KY., for Non-Payment of Court Costs, Fees or Fines. No other details about the arrests have been released.

Earl Stephens’s body has been taken to Frankfort for an autopsy.

This case remains under investigation, and the handling of the investigation is by the Kentucky State Police Post 8, in Morehead.

GUSSLER MISSING AT BLAINE, FAMILY REACHES OUT FOR HELP