THREE LOST LIVES AND OVER 25,000 HOMES OR BUSINESSES WITHOUT POWER ACROSS THE REGION; EMERGENCY DECLARED IN EASTERN KENTUCKY AS FLOODWATERS RISE 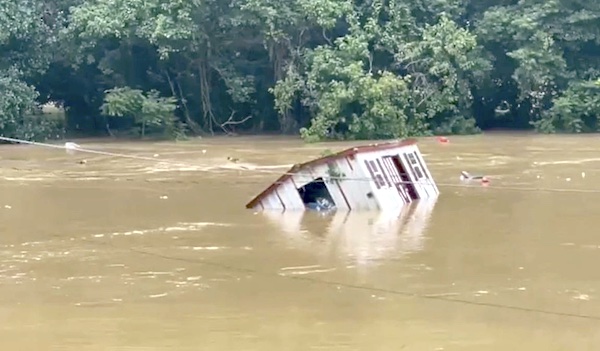 FRANKFORT (July 28, 2022) – Historic torrential rains unleashed flash flooding and mudslides in parts of eastern Kentucky Thursday night. Floyd, Breathitt, Clay, Owsley, Letcher and Pike counties are all under a state of emergency. Electrical outages were reported throughout the mountain region where thunderstorms have dumped several inches of rain over the past few days. Flood watches and warnings were still in effect late Thursday morning.

As the situation quickly deteriorated, Perry County emergency dispatchers reported homes were knocked off of their foundations by the swift current.

“This morning my office has been busy receiving calls from around our district regarding the heavy flooding,” Sen. Brandon Smith (R-Hazard) said. “We will continue to update the state and federal agencies of our needs and will keep you updated as we begin to assess the damage and clean up. I will personally be in the heavily impacted areas today on the ground assessing the damage and helping folks however I can.

“Many roads throughout the region are currently impassable and, according to the National Weather Service, we should expect to see one to three more inches. I’m urging all people in low areas in Perry, Leslie and Clay counties to seek higher ground.”

Jenny Wiley, Buckhorn and Pine Mountain state parks have been opened to people in the region whose homes were destroyed or damaged

“I am closely monitoring the situation from Harlan,” said Sen. Johnnie Turner (R-Harlan). “I urge anyone who is in a dangerous situation to immediately seek shelter on higher ground and reach out to emergency services. Please, for your safety and for the safety of your loved ones, do not try to pass through flooded roads. My family and I are praying for all of those who have been negatively affected by this.”

It has been confirmed that three people have lost their lives and over 25,000 homes or businesses are without power across the region. Some areas have seen up to eight inches of rain, with more forecasted over the weekend.

“My heart goes out to every family in eastern Kentucky who has been affected by the severe storms and flash flooding,” Sen. Philip Wheeler (R-Pikeville) said. “In addition to seeing the effects first-hand in Pike County, I have followed the damage reports on social media and spoken to several friends from throughout the 31st Senate district, some of whom are homeless and have lost most of their belongings. I am asking for all Kentuckians to keep these folks in their thoughts and prayers.”