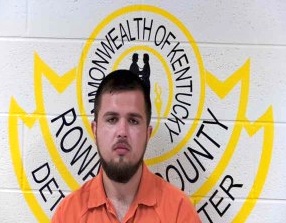 KYLER SHAWN HUTCHINSON, 23, WAS ARRESTED BY THE ELLIOTT COUNTY SHERIFF OFFICE ON TUESDAY, JULY 26, AFTER A TIP LED TO THE DISCOVERY OF  NUDE PHOTOS OF MINORS FROM SEVERAL STATES THAT HE OBTAINED VIA A FAKE SOCIAL MEDIA ACCOUNT.

An Elliott County man was arrested on Tuesday, July 26, after allegedly contacting underage victims in different states for nude photos.

Elliott County deputies were notified about the alleged activity on Monday, July 25. Kyler Hutchinson was charged with two charges:

Kyler Hutchinson was lodged in the Rowan County Detention Center in Morehead, KY. He is currently being held on a $5000 full cash only bond.

This is not the first time Kyler Hutchinson has had a brush with the law involving child sex crime as just a little over three years ago, on July 14, 2019; Kyler Hutchinson, who address at the time was listed as being in Stanton, KY., in Powell County; was arrested in Carter County troopers from the Kentucky State Police Post 8 in Morehead, KY., on the charge of Sodomy, 1st Degree; which also involved a juvenile. It is unknown what was the outcome of that case.