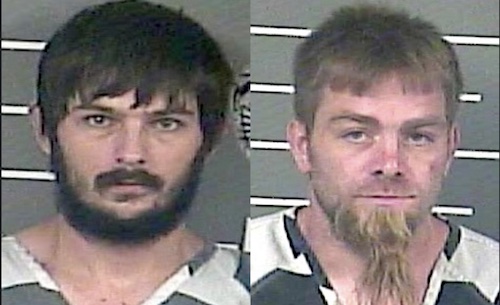 TWO CRIMINALLY MEAN WHITE BOYS: STEPHEN HAMILTON (LEFT PHOTO), 24, OF TEABERRY, KY., & LEVI TACKETT (RIGHT PHOTO), 33, OF MCDOWELL, KY., WERE ARRESTED IN PIKE COUNTY, KY. ON NUMEROUS CHARGES ON JULY 18, IN CONNECTION TO AN UNLAWFUL IMPRISONMENT AND ASSAULT CASE INVOLVING A SURPRISE ATTACK ON A MAN AT AN APARTMENT BUILDING IN PIKEVILLE, KY.

Two Floyd County, Kentucky men remain in jail, after allegedly ambushing another man in Pikeville then assaulting and holding him prisoner.

According to a press release report from the Pikeville Police Department, they stated that on Monday, July 18,  Stephen Hamilton, 24, of Teaberry, KY., and Levi Tackett, 33, of McDowell, KY., laid in wait in a Kentucky Avenue apartment, waiting for the third man to visit a woman who was living at the apartment.

When the man arrived, Stephen Hamilton and Levi Tackett allegedly took his gun and held him at gunpoint.

When Pikeville police officers arrived, they reported Stephen Hamilton ran out the back door, while Levi Tackett used the distraction to try to flee in a vehicle. Both of the men were quickly apprehended.

The Pikeville police officers then found the victim, who was bleeding and with injuries to his head and face.

Stephen Hamilton was arrested by Pikeville patrolman officer Daniel Fields, and was charged  with seven (7) criminal offenses, which are as the following:

Levi Tackett was arrested by Pikeville patrolman officer Josh Lawson, and was charged with four (4) criminal offenses, along with charges from nine (9) outstanding warrants from three (3) counties; six (6) from Floyd County; two (2) from Magoffin County, and one (1) from Pike County; which are as the following:

This case remains under investigation by the Pikeville Police Department