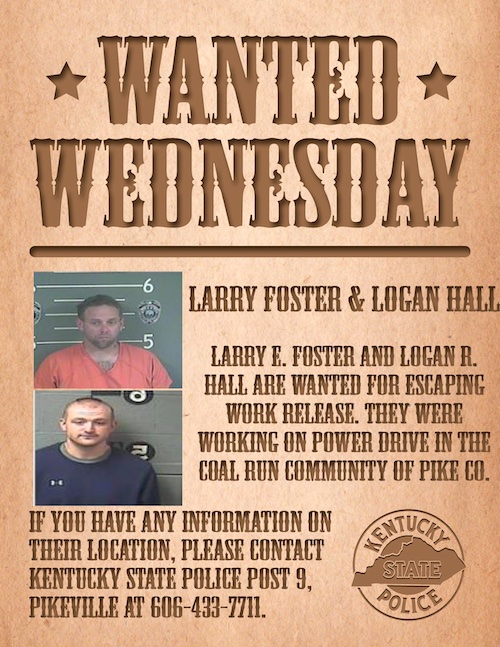 ON THE RUN: LARRY E. FOSTER (TOP PHOTO), & LOGAN RYAN HALL (BOTTOM PHOTO); ARE BEING SOUGHT BY THE  KENTUCKY STATE POLICE, AFTER THEY ESCAPED FROM THEIR WORK RELEASE IN PIKE COUNTY, KY.

The Kentucky State Police Post 9 in Pikeville, KY. are looking for two Eastern Kentucky men who escaped from their work release in Pike County, KY.

According to a press release BOLO alert from KSP trooper Michael Coleman, who is the public affairs officer for KSP Post 9, Larry E. Foster, 42, of Stearns, Ky., and Logan Ryan Hall, 30, of Mousie, KY., are believed to be in a stolen 2014 blue Kia Sorento with a Kentucky license plate reading 638 YFX.

According to law enforcement officials, Larry Foster and Logan Hall escaped from work release on Tuesday, July 19. Both men were working on Power Drive in the Coal Run community of Pike County.

Logan Ryan Hall is 6′1″ and from Knott County, KY.

If anyone has any information on the location, you are asked to please call the KSP Post 9 in Pikeville at 606-433-7711.