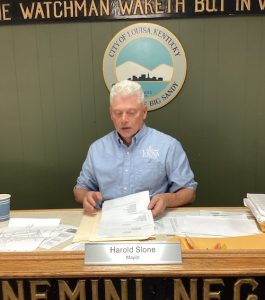 City Pool and Park to get new handicap accessible restrooms in next two weeks, Mayor says

“We need 3 people on this Board, we are looking for one more to complete the Board and Melissa Shapaka showed a willingness to help.”  None Opposed. Motion by Matt Brown 2nd by Ashley Caudill.

“Rescue 1 is a 1990 model and was purchased in 2009,” he said.  “Rescue 1 was hit during the 9-11 attack in Fairfax, VA at the Pentagon and is unique.”  But Preston has offered Rescue 1 to other Fire Departments in Lawrence County, Kentucky and no one was interested. Rescue 1 has been on an online auction 2 times and no bids were given.”

Inez Fire Department has shown interest in Rescue 1 because it has oxygen capabilities,Preston said. “Before Inez showed interest in Rescue 1, we purchased 8 radios for $100 and gathered old radios around the city and Inez fixed the radios to the same frequencies,” Preston explained. “We had trouble hearing each other on radios during the American Idol Noah Thompson Parade and Concert once other frequencies entered Lawrence County. So the Fire Department wants to donate Rescue 1 to Inez in exchange for their work on our radio system.”  Motion by Gary Robinson 2nd by Joey McClanahan.

“The Louisa City Pool and Louisa City Park will have ADA compliant (wheelchair access) restrooms and should be finished within the next 2 weeks,” Slone said.

Also the milling and paving around the City of Louisa will continue. “The delay has been the milling of potholes but the Louisa City Workers should be finished by the 3rd week of August.

Once everyone has vacation the City Council Members will continue on regular schedule.”

The Louisa City Council has the next regular scheduled meeting on August 9, 2022. The Meeting will be held at Louisa City Hall, 215 N Main Cross St., Louisa Ky.