SUSPECT IN HIS EARLY 20s, ALREADY HAS A SHORT BUT VERY EXTENSIVE ADULT CRIMINAL HISTORY 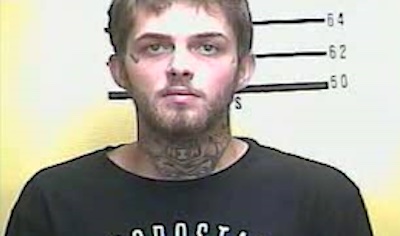 NICHOLAS GRAY, 23, OF MIDDLESBORO, KENTUCKY; WAS ARRESTED ON THIRTY-FIVE (35) CRIMAL CHARGES, WITH AROUND HALF OF THEM FELONIES, AFTER A WELFARE CHECK LED POLICE AND HUMAN RESOURCE OFFICERS TO THE SCENE OF THE DISCOVERY OF THE SUSPECT, WHO WAS ALREADY WELL KNOWN TO AREA LAW ENFORCEMENT OFFICIALS. Photo WRIL Radio.

What started out as a welfare check complaint by police and state child services in the city of Middlesbore, in Bell County, Kentucky over the weekend, ended up in a disturbing criminal discovery, involving a male suspect already known by area police during his few years of adulthood.

According to the arrest report, on Saturday night July 16, 2022, at approximately 6:30 P.M., several Middlesboro police officers were following up on a previous night’s complaint involving juveniles fleeing from a South 23rd Street residence. Department of Human Resources Social workers also responded to the home

Responding were Middlesboro Officers Caleb Ayers, Morgan Justice, and Jacob Quillen, who followed the DHR social worker into the home after determining exigent circumstances existed prior to entering

The occupants of the residence were Nicholas Taylor Gray, 23, of Middlesboro, and three juveniles. Nicholas Gray was found in the bathroom naked with two of the small children, his son and daughter. The third child was found hiding behind a refrigerator in the kitchen and had to be detained after becoming irate. After the third child made her way to a bedroom, Officer Justice noticed a clear bag containing suspected Methamphetamine.

The same child stated that Nicholas Gray, a convicted felon, had a firearm in the closet of the bedroom. Officer Morgan Justice then retrieved a 9mm Hi-Point carbine rifle in the floor of the closet, within reach of the children.

After everyone was escorted out of the home, Nicholas Gray was asked for consent to search the residence, which was given by him. During the search, officers found a box of syringes, both capped and uncapped, a pencil box containing more syringes and marijuana cigarettes, another bag of suspected methamphetamine, and a prescription pill bottle from someone who did not live in the home.

During the search of the residence, officers noted the unsuitable living conditions of the home, including dog feces and urine including what appeared to be human excrement, trash and food containers strewn throughout the home, and mold. There were two starved and malnourished dogs in the home with eleven puppies and there was no access to food or water. The animals had visible marks on their bodies from neglect.

Outside the home, officers saw two older dogs leashed and chained to the house and ground that were also malnourished and neglected with open infected wounds. They also did not have access to food or water.

The third juvenile had been staying with Nicholas Gray and was in a relationship with him. This relationship, investigated by Officer Caleb Ayers, lead to a rape charge against Gray, who also admitted that the girl used methamphetamine daily. The children were taken to Middlesboro ARH to be evaluated and it was determined that they had been subjected to abuse.

Nicholas Taylor Gray was arrested and booked into the Bell County Detention Center and was charged with a total of thirty-five (35) criminal offenses, which were as the following:

*ENDANGERING THE WELFARE OF A MINOR,

*POSSESSION OF FIREARM BY CONVICTED FELON,

Nicholas Gray is currently being held at the Bell County Detention Center in Pineville, KY., and he has no bond on all of the charges except for one, the third degree rape, which is for a $250,000 full cash bond.

This latest criminal case involving Nicholas Taylor is the most severe for the young but already hard criminal, as though he is only 23 years old, Nicholas Taylor in his little over five years as an adult, had already been arrested in several southeastern Kentucky counties at least twenty times, on at least forty-four (44) criminal charges, mostly felonies; and he has already served a brief sentence in state prison.