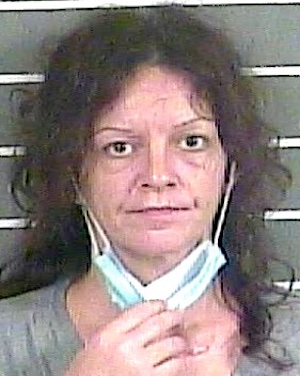 GOING TO SPEND DECADES (AND LIKELY THE REST OF HER LIFE) IN BOTH FEDERAL AND STATE PRISONS: TIFFANY R. MILLER, 38, OF KENDALLVILLE, INDIANA; PLEAD GUILTY TO TWO FEDERAL GUN CHARGES IN CONNECTION TO HER SHOOTING & WOUNDING A KENTUCKY STATE POLICE TROOPER IN KNOTT COUNTY IN JULY 2021; AND IS STILL FACING STATE CHARGES AS WELL

An Indiana woman who stands accused of shooting a Kentucky State Police trooper last year in Knott County, KY., has been sentenced to 20 years in prison in a federal firearms case related to that case.

Tiffany R. Miller, 38, of Kendallville, Indiana, was charged in U.S. federal court in Pikeville, KY., on September 1, 2021, with possession of a stolen firearm and possession of a firearm by a convicted felon.

In her guilty plea agreement, Tiffany Miller admitted to stealing a gun and a truck in Knott County back on July 10, 2021. Law enforcement authorities say the incident resulted in Miller shooting Kentucky State Trooper Bradley Couch in the shoulder, when he tried to arrest her.

Tiffany Miller pleaded guilty to the federal gun charges back in March of this year; and on Friday, July 15, she was sentenced to 10 years on each charge, which will run consecutively. Tiffany Miller was also ordered to pay more than $17,000 in restitution.

That state case is still pending, with the next hearing for Tiffany Miller is tentatively scheduled for Friday, September 2.