Cost of projector not revealed, no bids on project; Making the website better and the selection of books are goals set

2. May 2022 Financials – Motion by Kim Burchett 2nd by Marc Lester. No Discussion. None Opposed. (No copy provided for the public. It is NOT on their website or FB.)

3. Dan Miller – Strategic Plan – Discussion by Dan Miller from Miller Consulting Group from Georgetown, Kentucky. Miller went over the Strategic Planning and had a draft plan prepared for the board members.

Miller said, “I went over the surveys and took out all the really Good and really Bad comments. (Miller said Librarian Carlie Pelfrey has a list of ALL the comments).  Some of the Strengths to build on according to the survey were steady funding, population growth and children’s programs.

Some of the weaknesses on the surveys included the hours of service for the library, marketing, not enough staff and overtime.

“The Public WI-FI is in high demand and nothing needed to be done on the library building or children’s area. Although the library needs to work on Hours of Operation, making the website better and the selection of books per the surveys.” Miller said. “This 3 Year Strategic Plan will run between Fall of 2022 to 2025. If there are any changes that need to be made to the Strategic Plan will be finishing by next regular scheduled meeting.”  Motion by Marc Lester 2nd by Susie Chambers, none opposed.

4. Board Update – Discussion from Library Director Carlie Pelfrey:  “I have been looking to purchase a Projector for the meeting room with a wireless mic. I have been in contact with a company and the gentleman has already been to the library to measure and take pictures of the meeting room where the projector will be.”

Library Treasurer Kim Burchett asked Pelfrey if that was the only business that has sent a bid.

Pelfrey said, “One company doesn’t sell projectors anymore, and the other bid was in Huntington, WV.” Pelfrey said.  “I received a bid from the Huntington business which was recommended to Pelfrey by Lee Balaklaw.

Kim Burchett Treasurer for the LC Public Library Board said, “I think we should get another bid to see the cost price difference.”

Pelfrey said, “The equipment turnaround will take up to a 1 1/2 months to complete. Also electrical work has to be finished before the no bid projector arrives.”

Library President John Osborne asked Carlie how when she advertised the bids, Pelfrey replied she didn’t get any bids she just asked friends for recommendations.”

On Tuesday July 12, 2022  Vice-President of the Lawrence County  Library Board Susie Chambers, emailed the website for financial reports for the library to the ‘Lazer.’  Although we had trouble navigating through the ‘Library Website’ which is actually lcplky.org , there is a list of yearly financial reports starting with FY 2013 – 2014.

The Library Board of Trustee Members are required to review financial reports monthly. (Per the library website) On lcplky.org website are monthly financial reports to FY 2013- 2014 you have to contact the LCPLKY Director Carlie Pelfrey via written request for reports or for additional information, the website says.

(Note: It would be positive action on the library’s behalf to show ALL FINANCIAL REPORTS from every year since opening.)

This is the latest report signed Monday at the board meeting which shows the library has more than $2 million in funds on hand. The property taxpayers of Lawrence County contributed more than $902,000 to the library this year according to tax records provided by Sheriff Chuck Jackson. 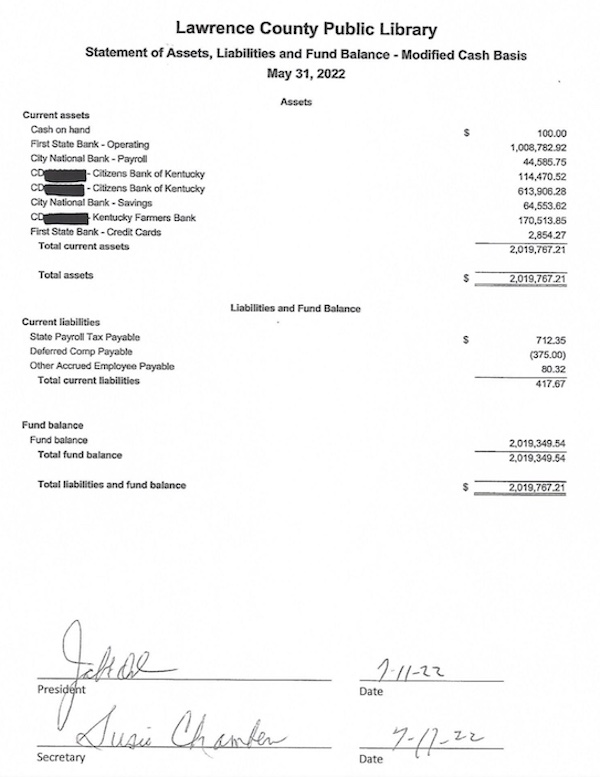 The Library had more than $7 million in 2018 with most of it in old Inez Deposit Bank: 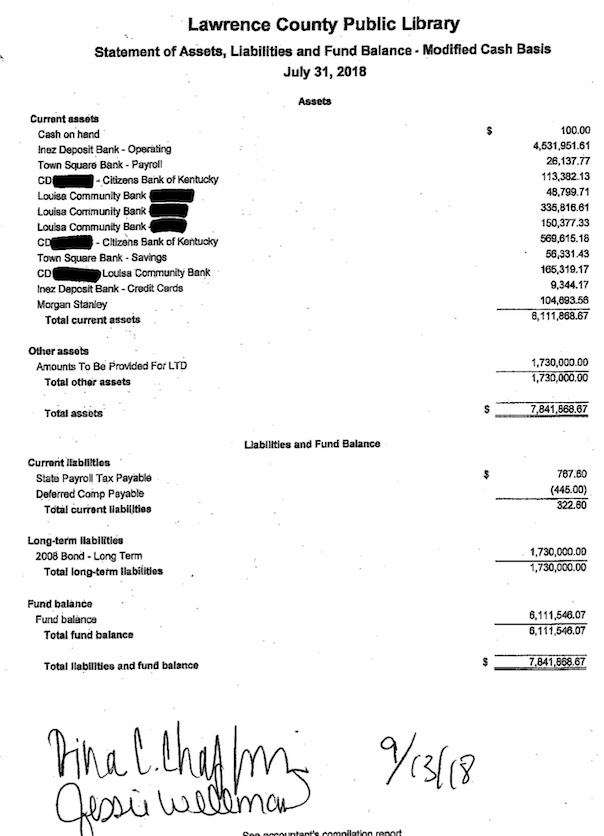 Leave a Reply to Flushed with Cash Cancel reply