LIGHTING UP LOUISA WITH ‘SPONGEBOB’ AT THE GARDEN THEATER…

LIGHTING UP WITH SPONGEBOB AT THE GARDEN THEATER…

On Friday July 8, 2022 at 6:30 the Mountain Movers Theatre Company (MOMO) presented OPENING NIGHT of ‘The SpongeBob Musical’ at the Garden Theater in downtown Louisa, Kentucky. This is Broadway’s Award – Winning Hit based on the series by Stephen Hillenburg – Book by Kyle Jarrow – Musical Production Conceived By Tina Landau.

The evening started off with delicious appetizers followed by dinner using the SpongeBob theme which included ‘Make Your Own Krabby Patty’ and desserts.

This dynamic musical started out in peril where the stakes are higher than ever.

SpongeBob and all of Bikini Bottom face the total annihilation of their undersea world from a volcano. Chaos erupts, lives hang in the balance and just when all hope seems lost, a most unexpected hero rises up and takes center stage and the power of optimism really can save the world!
Children in attendance as well as adults were treated to a lively show in a great atmosphere right here in Louisa, Ky. 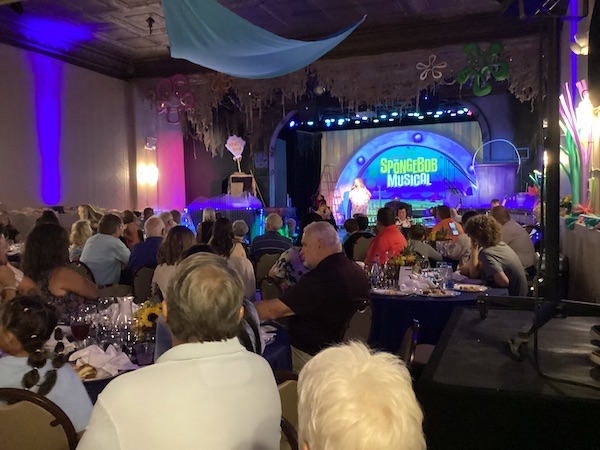 Musical Numbers in ACT ONE included the Prologue, Bikini Bottom Day, No Control BFF, When the Going Gets Tough, (Just A) Simple Sponge, Daddy Knows Best, Hero is My Middle Name, Super Sea Star Savior and Tomorrow Is. 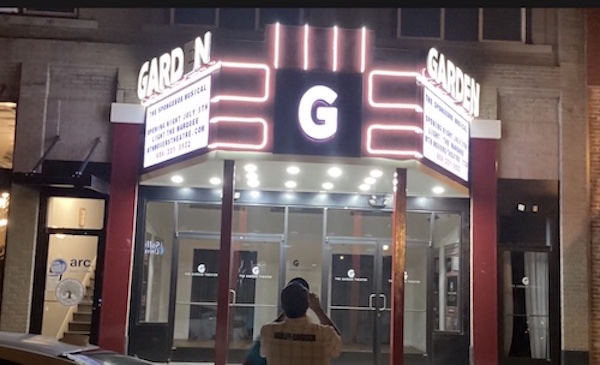 Lighting up the new marquee. Lazer photo by Susan Salyer. See video above.

After the show ended folks got their photos taken with the Cast and Artistic Staff. Then everyone proceeded outside to the street in front of the Garden Theater for a short ceremony unveiling the ‘NEW MARQUEE’.

Mayor of Louisa Harold Slone said ‘It was great to see everyone come out and this was a much needed addition to the City of Louisa.’

Robinson said! ‘I have a Special Guest to Light the Marquee tonight and he’s the reason we have theater in Louisa.’ Robinson went on to say ‘One night his family was coming home from a show at Jenny Wiley and Russ asked why don’t we have shows in our town. Robinson said Russ deserves all the credit and has inspired us all.”

KERMIT WOMAN HAS BEEN MISSING SINCE JUNE; LAST SEEN AT RESIDENCE IN LOUISA