These charging stations can work in 30 minutes, providing power for 250 miles 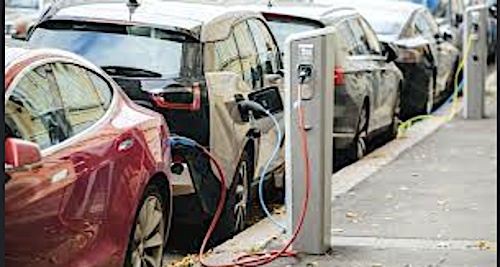 FRANKFORT – Legislators on the Interim Joint Committee on Transportation learned Tuesday about steps being taken by state officials and others to make operating electric vehicles more convenient in Kentucky.

“I say initial because we anticipate this being updated routinely over the five-year life of the National Electric Vehicle Infrastructure funding, or NEVI funding. Between updates we will continue to receive input from all sectors, and we will incorporate that into future updates,” he said.

Legislators on the committee had several questions and comments for Moore, who said the goal of the funding program is to create a convenient, reliable, affordable and equitable national electric vehicle charging network.

The initial focus of the NEVI Formula Funding Program is for charging stations on interstates to support long distance travel. Kentucky is set to receive $69.5 million over five years for the project from the federal government. This is expected to be matched with $17.4 million from non-federal funds.

Rep. Ken Upchurch, R-Monticello, and co-chair of the committee, asked Moore how electric vehicles might affect the power grid.

Moore said state officials have had conversations with electricity providers, and they are not concerned with the current power demand. He said a major impact on the power grid would require the rapid adoption of electric vehicles, which is not expected in Kentucky.

Sen. Jimmy Higdon, R-Lebanon, and co-chair of the committee, asked Moore how officials will determine who gets to operate the charging stations.

Moore said the process is yet to be determined but agreed that multiple vendors could be vying for the stations at the same time. He explained that private investment, in addition to the NEVI funding, could help meet some of the demand.

“The demand we see on a lot of the interstates within five to 10 years will require more than what this program will roll out,” Moore said. “There is an opportunity for the marketplace to fill in where these funds do not touch.”

Sen. David Yates, D-Louisville, said expansion of electric vehicle usage is exciting. He acknowledged that Kentucky is “kind of late in the game,” but said one of the benefits is that Kentucky gets to learn from other states, particularly when it comes to avoiding monopolies.

“We know that in four to seven years – Kentucky being a logistic hub – that we are going to need to be on grid in order to not lose that economic impact that is coming through,” he said.

Rep. Ashley Tackett Laferty, D-Martin and Sen. Johnnie Turner, R-Harlan, both expressed a need to include more routes in Eastern Kentucky in the plans.

Rep. Samara Heavrin, R-Leichfield, asked about federal and state matching funds. Moore said the program is unique because private funds can be used to match other funds.

Rep. Tom Smith, R-Corbin, said he is a supporter of hybrid vehicles, and he added the Transportation Cabinet should come up with recommendations about how to tax electric vehicles.

Sen. Karen Berg, D-Louisville, asked about charging stations that are not as profitable as others and if they would still be offered.

Moore said he wants deployment of the charging stations to be successful, and Kentucky will learn from other states.