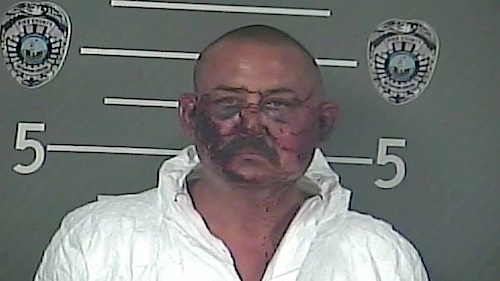 THE PORTRAIT OF A MAN TURNED EVIL LUNATIC COP KILLER; WHO IS NOW IN CUSTODY.  LANCE STORZ, 49, OF ALLEN, KENTUCKY, WHO ON THURSDAY NIGHT IS RESPONSIBLE FOR ONE OF THE DEADLIEST POLICE SHOOTOUTS IN EASTERN KENTUCKY HISTORY

Law enforcement agencies across the state of Kentucky, and especially here in eastern Kentucky, are in shock and sorrow, after what started as an arrest warrant being served by deputies in Floyd County on a man in a domestic incident, went to all hell breaking loose when the suspect opened fire on officers, and barricading himself in his home with his wife and child, while engaging in massive constant exchanges of gunfire with a huge gathering of police officers at the scene.

The gruesome situation happened Thursday evening and into the night in the main part of the tiny town of Allen, population of less than 200, in north central Floyd County.

Floyd County Sheriff John Hunt reported to Hazard television news station WYMT that the suspect is in custody as of 10:00 P.M., Thursday night, and posted on the FCSO Facebook early Friday morning that the shooting resulted in at least one death.

Sheriff Hunt also confirmed  that deputies were attempting to serve a court-issued warrant in a domestic violence situation when the incident started earlier in the evening. The suspect opened fire when officers responded, Sheriff Hunt added that several officers have been taken to different hospitals around the region.

A large number of law enforcement investigators are still working the case, and they stated details are limited for now.

“It’s a very dynamic scene,” Trooper Gayheart said. “A lot of stuff to cipher through and go through before we have more information.”

The KSP’s Critical Incident Response team, along with KSP Post 9, and KSP Post 13-Hazard, KY. personnel are leading the investigation as of now.

UPDATE BY THE HOUR– At around sunrise, more information was released about the shootout, as the arrest citation from the  Kentucky State Police said eight people were shot in the Allen community Thursday night.

The KSP identified the suspected shooter as Lance P. Storz, 49, of Allen, Kentucky. The citation stated the shooting happened at a home on Main Street in Allen.

Five other police officers were shot, and the emergency management director was injured also.

Lance Storz faces multiple charges, including one count of murder of a police officer and two additional counts of attempted murder. He is also charged with assaulting a service animal.

The Kentucky State Police took Lance Storz into custody, and he was booked into the Pike County Detention Center in Pikeville just before 5 A.M. Friday.morning.

Lance Storz is scheduled to appear in court at 9 A.M. Friday on the police murder charges in Floyd County Circuit Court.

UPDATE: The officers who died in the shooting late on Thursday have been named as Capt. Ralph Frasure, Deputy William Petry and dog handler Jacob Chaffins.  K9 Drago, one of the dogs that Mr Chaffins handled, also died.