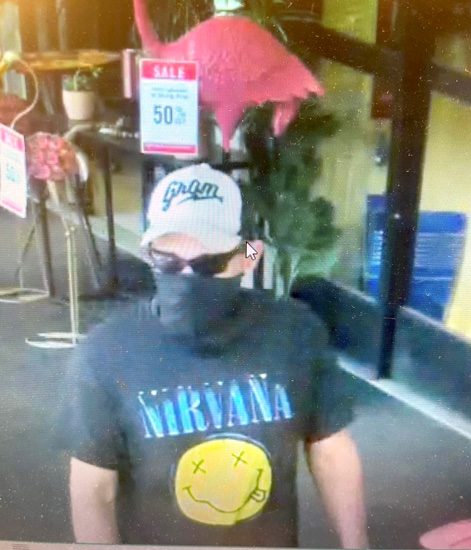 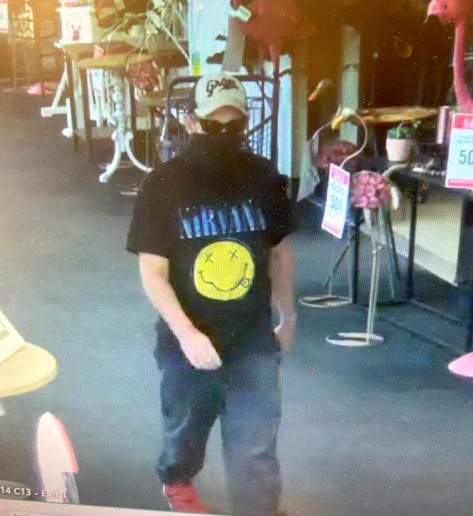 HE SMELLS LIKE TEEN SPIRIT: THE PIKEVILLE POLICE DEPARTMENT ARE ASKING FOR THE PUBLIC’S HELP IN LOCATING THE MALE SUSPECT IN THE PICTURES ABOVE, WHO REPORTEDLY COMMITTED THE ACT OF STEALING THOUSANDS OF DOLLARS IN JEWELRY IN BROAD DAYLIGHT FROM A JEWELRY STORE IN PIKEVILLE ON WEDNESDAY, JUNE 22.

Police are asking for the public’s help in locating this man, who is believed to have stolen thousands of dollars’ worth of jewelry from Kay Jewelers in Pikeville.

The Pikeville Police Department are looking for a male suspect who walked away with thousands of dollars’ worth of jewelry from a business in Pikeville, KY., on Wednesday afternoon, June 22; for which afterwards they then released security camera images to aid in the search.

According to the police, the man was on foot when he entered the Pikeville Commons Shopping center, and at 3:47 P.M., they said the man walked into Kay Jewelers, and was described via the video, while wearing a black face mask, sunglasses, jeans, a Nirvana t-shirt, and a cap with the word “Gram” embezzled into the front.

Once he was inside the store, the man walked to a display case and he then asked a female clerk to view an engagement set, looking at it briefly before asking the clerk about an item on the other side of the store. The clerk is said to have asked for the engagement set to be handed back, however he ignored her, and the man instead proceeded to walk out of the store, where his car was waiting with the engine running in the middle of the road.

In all, it is reported that the male suspect walked out with nearly $4,000 worth of jewelry.

The entire theft incident is said to have taken no longer than three minutes, and police say it was “100 percent planned.”

The jewelry store employees described the male suspect as possibly being in his 40s, and he was described as having brown hair with a substantial amount of gray. The man fled in a late-1990s or early-2000s gold or silver car, possibly a Toyota Camry.

Pikeville Police say they also have video of him inside of Hobby Lobby just a few minutes before he went to the jewelry store, but from there the trail grows cold.

Anyone with information about the jewelry theft suspect or theft incident itself, are asked to contact the Pikeville Police department at (606) 437-5111.

Lawrence County civil suits, deeds and marriages for the week of June 20-24