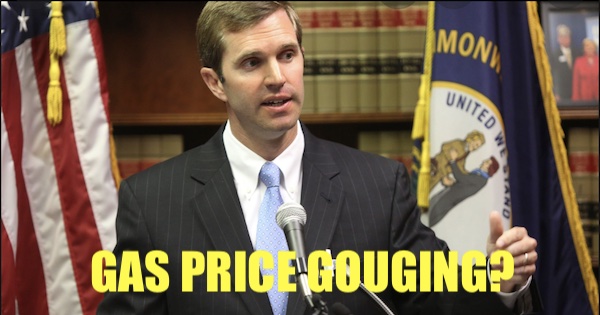 With the state of emergency in place, consumers in the commonwealth can report price gouging to the Office of the Attorney General and under state law price gougers can be held accountable.

“Kentucky families deserve relief from increasing gas prices,” Gov. Beshear said. “Everyone sitting at a kitchen table working on a budget knows that every little bit helps, and I will continue to seek and take any action that might make even the slightest difference.”

Recently, the Governor sent a letter asking the attorney general to advise him on whether to declare a state of emergency and thus activate the price gouging laws to further protect Kentuckians.

The attorney general responded nearly two weeks later and reported to the Governor for the first time that his office had received 263 complaints of price gouging since January 1 and that 22 of those complaints reported prices of 10% or more above the prevailing price in Kentucky at the time. The attorney general stated his belief that a declaration of a state of emergency would provide “minimal” relief.

Gov. Beshear took today’s action because he believes strongly that even minimal relief is better than no relief.

This action is just the latest action by Gov. Beshear to ease the burden of rising costs for Kentuckians.

In February, the Governor issued an executive order to freeze car values for two years at their January 2021 value for the purpose of motor vehicle tax valuation due to the pandemic-related rise in used car values. The resulting reduction in vehicle property taxes is saving Kentuckians approximately $340 million.

Also in February, working with Representative Angie Hatton of Whitesburg, the Governor supported legislation to cut the state sales tax from 6% to 5% temporarily. That measure, which would have been in effect from July 1 of this year, through June 30, 2023, was not adopted by lawmakers during the 2022 regular session. If passed by members of the General Assembly, Kentuckians would have seen $873 million in relief directly related to sales tax savings.

In March, Beshear and six other Governors sent a letter to Congressional leadership asking them to pass The Gas Prices Relief Act, federal legislation that “would alleviate the consumer cost of rising gas prices while protecting the federal government’s capacity to make infrastructure investments.”

On June 2, Gov. Beshear stopped a 2-cents-per-gallon hike in the state’s gas tax that would have taken effect on July 1. The state gas tax is set by statute, both in its rate and how it is calculated, and the current rate of 26 cents was set to increase, which would have resulted in a price hike on both regular and diesel fuel.

On June 9, the Governor sent a letter to top administrators at the U.S. Environmental Protection Agency, requesting that the administration grant a waiver and remove the requirement that more costly, “reformulated” fuel be sold in many urban areas – including the Louisville metropolitan area. While reformulated gas helps cut down on pollution, during these unprecedented times, the reformulated blend is adding an additional cost – as much as 20 or 30 cents or more per gallon – to Kentucky families who are already paying too much, the Governor said. The EPA has since responded verbally that they would not grant the waiver at this time but are continuing to monitor the situation.

Also on June 9, Gov. Beshear issued an executive order declaring a state of emergency over the baby formula shortage that has impacted the nation and the commonwealth. The Governor’s order activated state price-gouging laws, which aim to protect families seeking to purchase formula from the predatory pricing that can occur when supplies are limited due to high demand. Today, he extended the order for 30 more days. The Governor continues to urge Kentucky families to immediately report any instance of price gouging to the Office of the Attorney General.

Lawrence County Court Docket for the week of June 20-24