Special Guest  Randy Hall said, “There are participating restaurants in Louisa that will be having “Bicentennial Burger Week” participating restaurant’s would create a burger for the week and anyone purchasing a burger will be given one chance in a drawing for a Blackstone Gas Grill and (Ten) 10 – $50 Gift Certificates that will be given out. The restaurant’s will have Burgers to eat and vote for. The winner’s will be announced at the Fourth of July Parade on July 2, 2022. This Burger Contest will start on June 24 and end July 1, 2022. 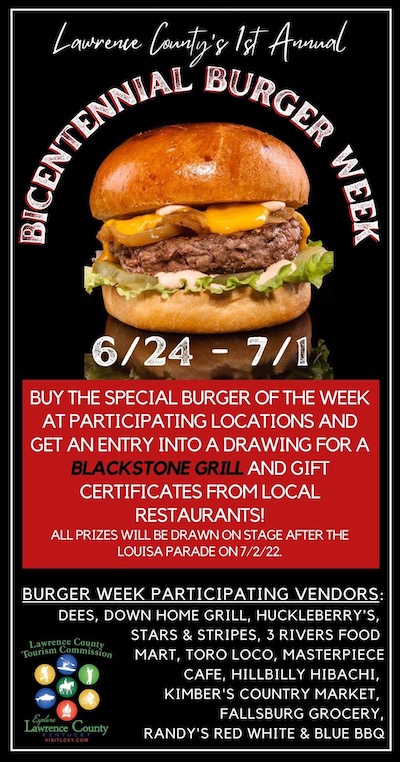 “Starting on July 1, 2022, is Kick Off for Lawrence County’s Bicentennial Celebration, there will be singing in the Louisa Mini-Park from 6:30-8PM,” Chaffin said.

4. Approval of March and April 2022 Minutes – Motion by Chris Jobe and 2nd by Rita Parker. (No Discussion, None Opposed)

5. Approval of March, April and May 2022 Financial Report – Motion by Susie Chambers and 2nd by Keith Chaffin. (No discussion, None Opposed) But there was no financial report provided for the public. Treasurer Brenda Hardwick was contacted Tuesday and she said she had left the copy at the Fred M. Vinson Center. She said she will have a copy ready by this Friday. The tourism board gets funding from a percentage of the Motel&Restaurant tax in the county as well as grants from the state and the county. According to discussion at the last meeting the tourism commission hasn’t produced a working budget “for the past two years.”

Website grant report – The LC Tourism Committee received a Grant from the State of Kentucky for $8,399.00 for a new website. The bid (that won) was $9,000. and the board decided to pay the extra $600 out of contingency funds. The money will be used to build and design a state-of-the- art website for the Tourism Committee.